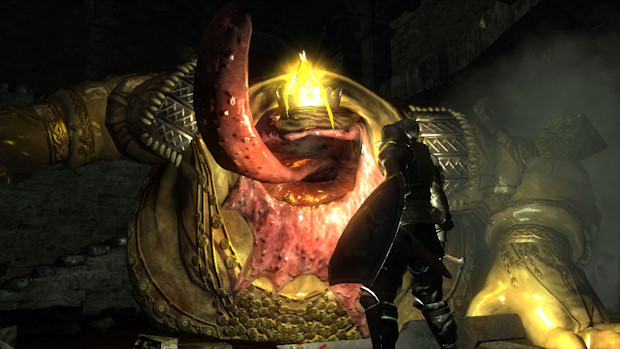 This is rather brilliant news. Due to a demand that exceeded initial expectations, Atlus has today announced that it will be shipping out more copies of Demon’s Souls so that the multitudes struggling to find a copy can get one. Initially shipped, like most Atlus games, in limited quantities, the amazing PS3 exclusive has been a hard to find as it is to play. Fortunately, a fresh batch of games are on the way, so the rationing can stop!

In less wonderful news, the Deluxe Edition has now completely sold out and Atlus won’t be publishing anymore. This means that the 160-page strategy guide is no longer available, and lucky punters who got the slipcased special edition probably have quite the rarity in their hands.

Still, this is great news that Demon’s Souls has been so successful that Atlus needs to send more copies out to stores. You don’t get to say that often about an Atlus-published game, and I’m thrilled that it’s happened with one of the finest RPGs I’ve ever played. Truly an amazing game, one that deserves all the success it gets.

“We’re thrilled at the level of interest and acclaim gamers are showing for Demon’s Souls, one of the best reviewed games of the year and one of the highest-rated role-playing games of all time,” stated Aram Jabbari, Manager of PR and Sales for Atlus.  “We’re working quickly to get more copies of the game out onto store shelves.  We thank fans for supporting a daring, innovative product, and we ask interested gamers to be patient as stock is replenished.”

The publisher also announced that the game’s Deluxe Edition, which featured a 160-page strategy guide and collectible embossed slipcase, is now considered out of print in North America and will not be remanufactured.

“While the now discontinued Deluxe Edition of Demon’s Souls was the only way to obtain the game’s official strategy guide, the title already benefits from an in-game messaging system, a tremendous online community, and dozens of online resources for players who are finding the game to be a bit challenging.”

Among those online resources is the official Demon’s Souls wiki (LINK), which offers a central location for community members to share what they’ve learned about the surprises that await in the Kingdom of Boletaria.  As more and more people discover the game, the community-driven assistance tools expand in quality and breadth, ensuring that while gamers are tested during their adventures, they never have to be frustrated.

“Mr. Jabbari,” interrupted a frantic worker.  “The game-making engines… They just can’t take much more of this!  They’re going to blow,” cried the man in a thick Scottish accent before turning about and returning to the game-making furnaces, soon followed by Jabbari.

Demon’s Souls is out now for PlayStation 3 system and retails with an MSRP of $59.99.  For more information, visit the game’s official website (LINK)..