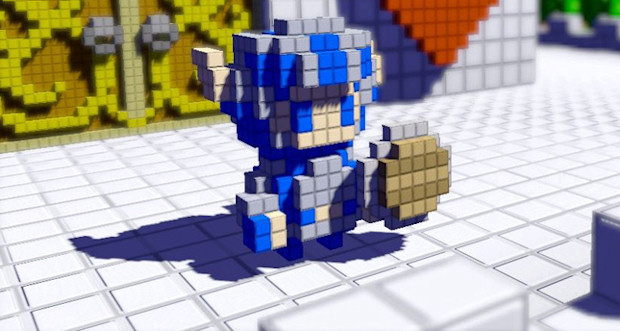 Rejoice! After many long weeks of waiting, Atlus has finally revealed itself to be the publisher of 3D Dot Game Heroes in North America. What’s more, we also have a release date! 3D Dot Game Heroes will be available on a PS3 near you from May 11, 2010!

Yep, not only do we have a release date, we also know it’s shipping at budget price! Bless you a thousand times, Atlus. For more information, you can check out the game’s brand new Web site.

3D Dot Game Heroes has received major coverage on Destructoid, where we’ve been intensely looking forward to the game. Despite the “OMG ZELDA” accusations, this is set to be a brilliant RPG. Anything even remotely linked to Demon’s Souls is worth being excited for, as far as I’m concerned.

And we are very, very excited.

“The 8- and 16-bit classics many gamers cut their teeth on are magical, down to their blocky sprites and elegantly simple gameplay,” mused Aram Jabbari, Manager of PR and Sales for Atlus, while twirling his rattail and wearing a poorly coordinated denim-on-denim outfit.  “3D Dot Game Heroes captures all of that legendary charm and more, bringing classic visuals, familar sounds, and a grand sense of exploration and discovery into stunning next-gen realization, all the while giving countless winks and nudges to the fans those iconic games mean the most to.  This is pure action-adventure gaming at its finest, a true love-letter to a time-honored genre,” he added while putting baseball cards in the spokes of his 10-speed.

For more information, visit the game’s official website:  https://www.3DDotGameHeroes.com
About 3D Dot Game Heroes
A long, long time ago, the Dark King Onyx brought an age of darkness upon Dotnia Kingdom.  Only by the bravery of a hero with a legendary sword was Onyx sealed in an orb, restoring peace to the world.  But Fuelle, a powerful Dark Bishop, has stolen the orb, and with it, peace.  Dotnia requires a hero once more!  Can you live up to the legend?

* Ultimate retro love letter — Seamlessly fusing new and old, the golden era of gaming is felt in every detail of this lovingly-crafted adventure. Eye-popping visuals capture the nostalgic charm of pixel graphics in cutting edge 3D. Simple, but deep action-adventure gameplay is a throwback to the 8-bit era. Veterans will find references and jokes that pay homage to the great games of yore.
* Awe and adventure live again — Embark on the next generation of classic exploration and discovery in a grand story-based quest. A hero sets out to gain the power of the six sages and the six orbs that protected the kingdom of Dotnia, which now stands on the verge of destruction.
* Customize your hero — When pixels are your building blocks, the possibilities are unlimited. Freely edit the look of your character, or design one completely from scratch, and then trade designs with friends via a compatible USB storage device. Your hero’s blade is also upgradeable, letting you add length and width to create a sword that fills the whole screen!