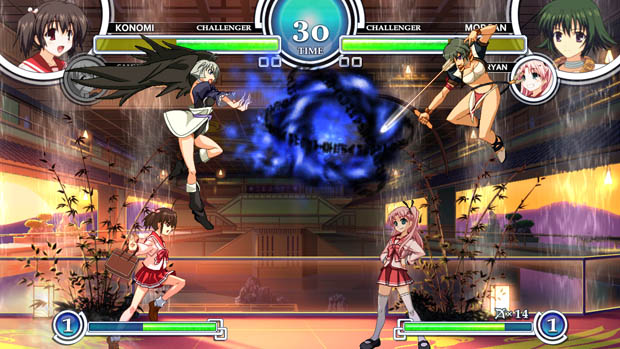 Six partners that are sure to have your back

In preparation for AquaPazza: Aquaplus Dream Match‘s November 19 release, Atlus has dropped another wave of info showcasing the game’s eclectic cast of warriors. In their latest batch, the publisher is highlighting the first six partners in this over-the-top 2D fighter that’s coming exclusively to PS3.

Take a gander below to read Atlus’s breakdown for each of these wild and crazy sidekicks. Fans of Tears to Tiara are sure to recognize a few faces. Also, check out the gallery for info on AquaPazza‘s main cast that we previously forgot to share.

Just one more 2D fighter to send this gen out in style.

Name: Satsuki Yuasa
Game: RoutesPE
Weapon: Gun
Background: Though she attends school by day, at night she dashes through the city with her trustworthy gun, “Chii-chan,” in search of a treasured sword that had been stolen from her family shrine in Kumano. Her cooking skills are so good that they exceed those of professional chefs.

Name: Mizuki Takase
Game: Comic Party
Weapon:  Hand-to-hand
Background: She wanted to be an ordinary college student, but unfortunately, her friends became involved in the otaku culture of doujinshi, a culture she despised.  At first, she didn’t understand the doujin world, but eventually grows to enjoy it. She is also very athletic and excels at tennis.

Name: Yu Inagawa
Game: Comic Party
Weapon: Paper fan
Background: Yu is a doujin manga artist who has some fame in the Kansai region of Japan. She traveled to the Comic Party convention in Tokyo in order to spread her name around other regions. Though she sometimes loses track of things when engrossed in drawing and selling her doujin work, she has a caring disposition and a lighthearted personality.

Name: Rathty
Game: Tears to Tiara: Garland of the Earth
Weapon: Giant hammer
Background: A timid fairy who is one of Arawn’s wives and comes from a tribe with a great history. Though she excels at forging and owns her own weapon shop, she prefers forging dinner knives and plates rather than weapons. You can always rely on her because she wields her trustworthy giant hammer to great effect!

Name: Octavia
Game: Tears to Tiara: Garland of the Earth
Weapon: Sword
Background: She is an Imperial warrior and one of Morgan’s best friends. As a member of a noble family with a long legacy as Imperial Knights, she is calm and collected in battle, but completely lacks common sense.  In Tears to Tiara, she had been enemies with Arawn, but in a wacky turn of events, she became another of his wives!

Name: Llyr
Game: Tears to Tiara: Garland of the Earth
Weapon: Trident and ice magic
Background: Llyr (pronounced “seal,” from Welsh), is a seal fairy. Her incredibly poor luck has shaped her into quite a pessimist, and she never ceases to make mistakes, making her feel even worse. For example, her encounter with Riannon and Arawn was extremely unlucky because they unknowingly burned her “seal skin.” Of course, according to the traditions of the seal fairies, this meant that Llyr had to marry Arawn and become one of his wives…