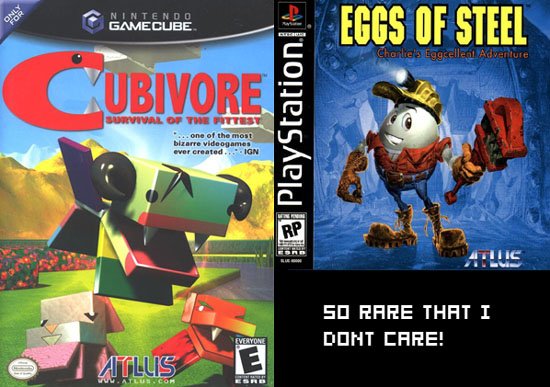 Ask anyone who missed an Atlus title’s launch and attempted to pick it up later how hard finding their games can be.  The only thing worse than being the gamer who tries to find the recommended Atlus title “too late” is being the “responsible” game buyer that let a good one slip through the cracks.  After being both several times, I started wondering why their games are so damned hard to find.

Luckily, MTV Multiplayer is on the case. They spoke with Atlus public relations lead Aram Jabbari about demand problems, and it turns out that some of the problem lies with the company’s size. The small publisher releases only niche Japanese titles, and this forces them to be very conservative with release numbers. “There’s no malice in it,” says Jabbari. “I wish we could produce to demand.”

“It’s a lot better to come up five percent short of total sales, as opposed to having 25 percent excess product. With that [extra] 25 percent, you’re going to have markdowns,” said Jabbari.

Sometimes, things are completely out of their hands. Last year’s PS2 title Odin’s Sphere was produced to the normal conservative estimates, but when the reviews and word of mouth hit, there were only so many copies to go around, and demand went through the roof. And it seems like the launch of the DS Lite managed to boost demand of Trauma Center: Under The Knife. The game was already about a year old by then.

It doesn’t sound like Atlus intends to increase production numbers anytime soon. But, gamers that play these types of games have known that for awhile. I recently had problems finding a copy of Disgaea: Afternoon of Darkness for the PSP. I lost my original PS1 copy of Persona, and I’m still desperately looking for a good quality copy. Arcana Heart is already reserved, so I don’t have to mess with hunting it down. I pray that Persona 3: FES makes it to my house safely.

My first instinct is to blame Atlus for creating a kind of false demand. But, the more I think about it, the more I realize that their typical release is not even close to a mainstream game, and that they’re really taking big risks with every release. And, in the long run, if their conservative releases help them to continue releasing quirky JRPGs and the like, I guess I can continue to preorder and hunt these titles down.