LET’S GET READY TO RUM … er, I probably shouldn’t say that. Michael Buffer has that phrase copyrighted and goes lawsuit-crazy against anyone who doesn’t beg him for his permission to use it. I know, I’ll start this preview off like this:

LET’S GET READY TO VIBRATE! OK, that sounds sexual (giggity).

All right, forget the stupid intro. All I really need to say is that the Ready 2 Rumble franchise has been brought back from the grave by Atari! Yes, Dreamcast fanboys and fangirls, let that feeling of nostalgia wash over your body. Now get ready to scrub yourself clean like Vincent Freeman does every morning, as you may not like what you’re about to read. Hit the jump to find out why Ready 2 Rumble Revolution might not be such a glorious return to the ring. 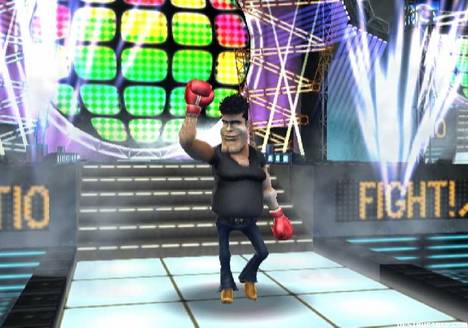 So Atari has brought back Ready 2 Rumble, an over-the-top arcade-style boxing game for the one system that makes the most sense: the Wii. It seems anything from our everyday lives that’s given an outrageous spin finds a home on the Wii. Then again, this is a boxing game and should work well with motion controls, right? Yes and no.

First, let’s get straight to the facts. Gone are all your favorite boxers of the past like Afro Thunder. In their place come caricatured celebrity boxers such as Shaun White, Brad Pitt, The Notorious B.I.G., Will Ferrell, Jack Black and a whole mess of other famous people you’ve always dreamed of beating the shit out of. 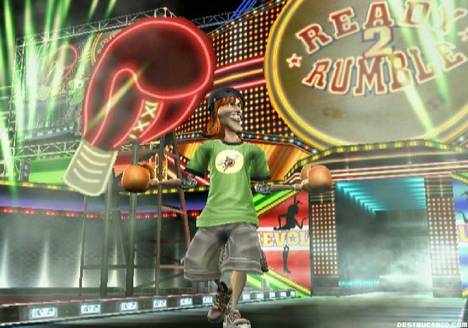 The controls are exactly what you would expect from a Wii boxer. The Wiimote and Nunchuk are both used as boxing gloves to fight in the game. There will be strategy that players can utilize, such as special moves, combos and other techniques. More than likely though, everyone will just flail their arms about as if they’re having a seizure to land hits on the computer or a friend through the game’s local play. I found it far easier, and funner, to just throw my arms around randomly.

I was excited for the return of Ready 2 Rumble, but was disappointed with what I ended up seeing. Casual players will definitely get a kick out of this, but fans of the old games will most likely be let down.

Ready 2 Rumble Revolution is being developed by AKI and will be published by Atari for the Wii.