Yesterday, Atari invited me out to their New York City offices to get some hands-on time with a number of games from their upcoming Fall 2008 slate of releases. Throughout the day, I’ll be bringing you coverage of said games; first on the docket is a DS “life simulation” title, What’s Cooking? Jamie Oliver.

As you probably guessed, What’s Cooking? is a cooking sim featuring celebrity chef Jamie Oliver (aka the Naked Chef). If the game sounds familiar, it’s probably because you saw Tiff’s introductory post from E3 on the game — of course, I’m sure her coverage of the game had nothing do with the fact that she’s a woman (…please don’t hurt me, Tiff).

If you’re rolling your eyes, assuming that What’s Cooking? is a mere wannabe Cooking Mama (or that Jamie Oliver is simply a wannabe Gordon Ramsay), think again. There’s a surprising amount of depth to What’s Cooking?, so if you have any interest at all in food and/or cooking — and I don’t just mean in videogame form — read on.

The main draw of What’s Cooking? is its hybrid nature. The cooking sim “game” side of the title features four main modes. There’s Test Kitchen, where you can follow Oliver’s step-by-step instructions to make 30 dishes; Challenge Mode, which tasks you with recreating 25 recipes as fast as possible; Time Attack Mode, which gives you 15 challenges to quickly recreate cooking methods; and Get Stuck In, the most intriguing one of all, a creative cooking mode that gives you carte blanche in a fully-formed digital kitchen to mess around with a massive variety of real kitchen items (ingredients, utensils, appliances, cookware) and create your own recipes. Of course, the game can’t tell you if the final product tastes good or not, but you can try that for yourself — more on that later. 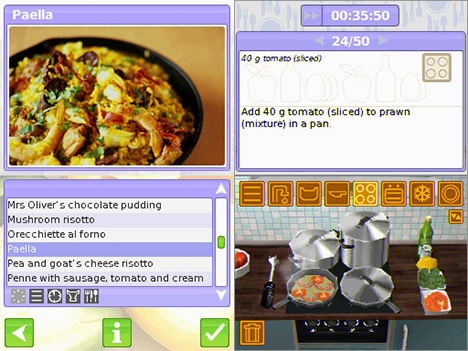 The other side of What’s Cooking? is that it can be used as a real interactive cookbook in your own kitchen. Obviously, this functionality is of great interest to foodies; David told me a story to explain this. He was given a pre-alpha build of the game for testing. On the way to the supermarket for some grocery shopping, he played the game. After completing one of the in-game recipes, a pot roast, he decided that he wanted to attempt the meal for real at home.

With a simple touch of the stylus, he sent the recipe over to the game’s interactive Shopping List. So not only do you follow recipes within the game, you can also follow them in your own kitchen. Sending a recipe to the shopping list will put all of the ingredients that the particular recipe needs on a list that you can check off with your stylus while shopping.

The smart design doesn’t stop there, though. Once you’ve bought all the necessary ingredients and are ready to begin cooking, you simply switch back to recipe mode and have your DS open as a digital cookbook while you’re preparing your meal! A note will even pop up, asking, “Hands dirty?” So if you don’t want to get olive oil on your DS, you can activate voice commands, allowing you to “flip” through the recipe by saying “next” and “back.” 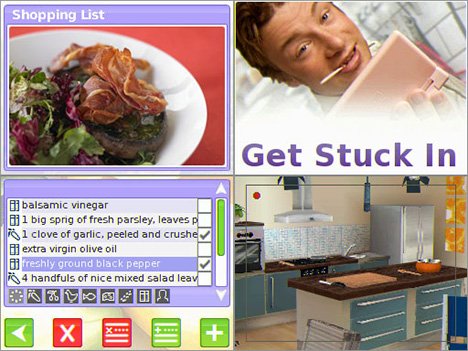 But I was even more astounded by the “Get Stuck In” mode. Once you unlock it, you enter the digital kitchen and “go nuts,” as David put it. The mode falls in line with Oliver’s current philosophy, which is to get as many people as possible into cooking. Every action you take — from shaking sugar into a bowl to sautéing onions — is recorded in a new recipe, and when you’re finished, you can wirelessly trade that recipe with your friends. You can even edit the existing 100 Jamie Oliver recipes — David mentioned adding broccoli to the pot roast — and those revised recipes can be saved and traded as well.

The game is also very accessible; everything is controlled with realistic stylus gestures. Making an omelette? Crack eggs with a quick downward motion, add everything else, and then twirl the stylus to stir the mixture. Oliver’s numerous recorded voice-overs are a nice touch, too. Overall, What’s Cooking? Jamie Oliver is shaping up to be a wonderfully deep but pick-up-and-playable title that isn’t just for the casual crowd. In fact, I’m hungry just thinking about it. Look for it to sizzle on store shelves this October. For more, check out Atari’s Web site, and screens below.