I was really looking forward to Alone in the Dark — so much so, that I put it at number eight on my list of the top 10 PS3 games I was anticipating the most this year. I say “was” — as in, past tense — because, of course, the reviews of the 360 version were overwhelmingly negative. As a PS3 owner, I retained a small sliver of hope, praying that developer Eden Games would fix the myriad problems with the 360 version.

Lo and behold, they’ve pledged that they will do just that. The PS3 version is set for release this November, and it’s going to include an extra sequence that the prior versions missed out on. But will it actually play better? I checked it out at Atari yesterday, where the main focus of the playthrough was what Eden changed from the 360 version; hit the jump to find out what I thought.

In his review of Alone in the Dark on 360, my colleague Conrad Zimmerman noted that there was a lot of promise to the game, but its glaring gameplay issues were just too numerous to overlook. He mentioned: poor pacing, repetition, a lack of camera control, ineffective weaponry, inventory management niggles, glitches, and a particular car sequence early in the game in which a single screw-up resulted in instant death. That’s a pretty damning laundry list of problems, but Eden Games has taken all the criticism to heart in reworking Alone in the Dark for the PS3. 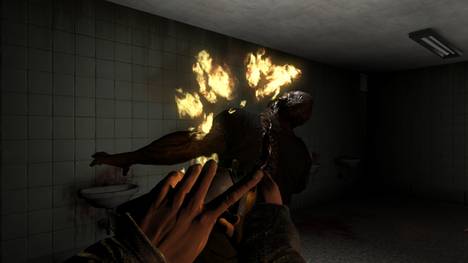 An Atari PR rep, Alissa, took me through a tutorial-esque level where she showed off a lot of the control improvements in the PS3 version. The right analog stick now provides full 360° camera control, and you no longer have to hold a button if you want to run (à la Resident Evil); merely pushing the left stick forward all the way will make Edward Carnby sprint. That should make it easier for you to get out of sticky situations.

The inventory system has also been revamped to reduce frustration. Now, going into your inventory will pause the game (on 360, you could still get attacked while you were in the inventory), and now, the order in which you combine inventory items no longer matters. In addition, you simply scroll through your jacket by going left and right, instead of having to point toward specific items. You won’t need to worry about your flashlight’s battery this time around, and dropping items doesn’t require a confirmation anymore.

When you pull out a weapon (hitting R1 will do that automatically), you’ll be put in the first-person view, and you can still cycle through your inventory — without actually entering the inventory manager — by using R2 (right hand) and L2 (left hand). The entire driving portion of the game has also been completely redone. Vehicle physics have been tweaked so they handle much better, with a better suspension and less of a tendency to drift. 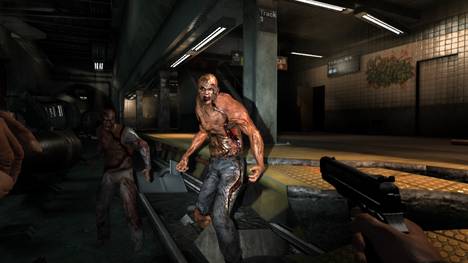 The fact that the driving has been improved is very important, and it shows. The 360 version contained a sequence, “59th Street,” where you had to drive through the streets of New York while fissures are opening up gaping cracks in your path. On 360, if you messed up at all, you were dead — so this level became extremely frustrating for gamers. I played through the revamped version of the level on the PS3, and even after screwing up a few times, I still made it to the final jump into Central Park (they also added a checkpoint at Columbus Circle, and one of your passengers now shouts directions at you so you’re not fumbling around blindly). I must say, I had a lot of fun with the updated level.

The only thing I was slightly unimpressed by were the graphics — the game lacks the current-gen polish that I expect of games nowadays. Otherwise, though, it appears that Eden Games went a long way toward rectifying the issues with the 360 version. Find out for yourself when Alone in the Dark hits stores on the PlayStation 3 (for $10 less than regular price) this November.

Filed under... #Alone in the Dark#Atari