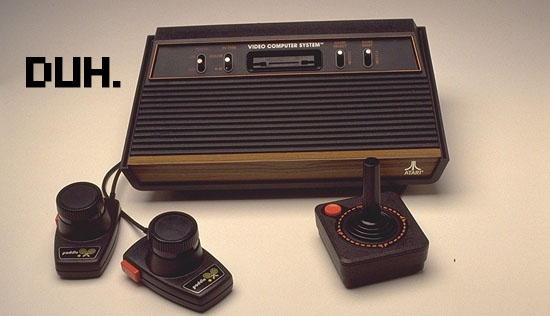 It was announced today that among the twelve toys nominated, the Atari 2600 was one of three to be inducted into the National Toy Hall of Fame at the Strong National Museum of Play. The other two? Raggedy Andy and the kite. Yeah, we’ll get to that in a minute.

The museum’s curator, John Paul Dyson, notes that Atari’s system paved the way for today’s gaming consoles, and “mesmerized a generaion with games such as Space Invaders, Pac Man, and Frogger.” You don’t say.

My question is, who’s in charge of deciding what to induct and what not to? The 2600 now has its spot, and most deservedly so, but the kite? Really? How was that not already in there?  Among the toys beaten out by the Atari were Hot wheels and Yahtzee, so it sounds like this is a pretty tough joint to get into. It’s at least nice to see our classic gaming roots getting some respect out there, or as much as you can garner when you share a room with the teddy bear, roller skates and Mr. Potato Head.