‘Janitor? I hardly even know her!’ – Steven Hansen

There’s no shortage of weird and unique game concepts at PAX East’s Indie Megabooth. That’s par for the course, though; show after show it goes that exact same way. Whereas some titles rely solely on their strangeness to make a name for themselves, others pair it with solid gameplay to strengthen their hand. Edelweiss’ Astebreed falls into this latter category.

First and foremost, Astebreed is a bullet hell shooter, and it doesn’t skimp on this aspect. At all times, the screen is full of imminent threats while you reciprocate. The arsenal at your disposal consists of two sets of ranged attacks each with a focused subset such as a conical strike, as well as a melee ability. Enemies constantly keep coming as the scene presented kind of twists and winds along in a “2.5D” way.

The most important aspect that Astebreed gets right is that while everything on-screen is completely hectic, the reference point always stays fixed enough so that you’re in control of the character. Often times games like this will move in unpredictable directions, causing a frustrating sensation like it’s resisting you. That’s not the case here, as it all controls well.

It’s a relief that controls aren’t an issue, because Astebreed doesn’t need to be any more challenging than it already is. After all, it is a bullet hell shoot-’em-up. The scenes unfold so that different combat techniques will need to be employed for the varying combinations of enemies. While it’s not always evidently clear how well you’re doing, you get the sense that if you’re still alive you’re just fine.

The reason for this disconnect with regard to performance is because there’s simply so much happening at once. You can’t quite tell how if you’re taking an unacceptable amount of damage or kicking some ass, because any time to process these things is instead spent on the next set of enemies. There’s a shield multiplier bonus that gives some indication, but this changes just as frequently as everything else.

The biggest shame as a result of the constant flurry of action is that there’s almost no time to take in the story. Text plays in the lower-left corner, but it’s borderline impossible to pay attention to. The reason for the madness is that Astebreed takes place in the middle of a war between the humans and a mechanical alien horde. Your character, Roy Beckett, is a janitor whose father died at the hands of the aliens, and Roy’s out to avenge his death. 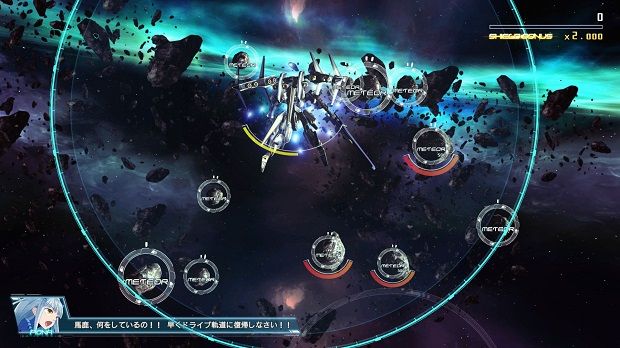 While the narrative looks like it might be a bit much to take in on-the-fly, the visuals won’t be. The mechanized look permeates the style, and all the firepower adds a ton of color and brightness. The backgrounds have a realistic look about them that blends nicely with the over-the-top action.

I was able to best the first chapter with relative ease, but the second one did me in. Typical of games like this, it seems as if this’ll be the experience that most people have. First and foremost, titles such as this need to offer up tough-as-nails gameplay, and Astebreed looks ready to deliver on that front.