Ubisoft took a bold step in opting to release Assassin’s Creed Unity exclusively on PC, PS4, and Xbox One. With a fragmented userbase on consoles, publishers are mostly taking the predictable approach of launching games on last- and this-gen systems, obviously to maximize sales. Maybe the business-savvy (or at least conventional) logic backs this decision, but that’s not what Ubisoft’s doing with Assassin’s Creed Unity.

By dedicating itself to developing solely on the most powerful platforms available, Ubisoft has opened the door to make the most involved and detailed Assassin’s Creed title yet. That’s a good thing because if our hands-off demo is any indication, Paris during the French Revolution has many stories to tell. 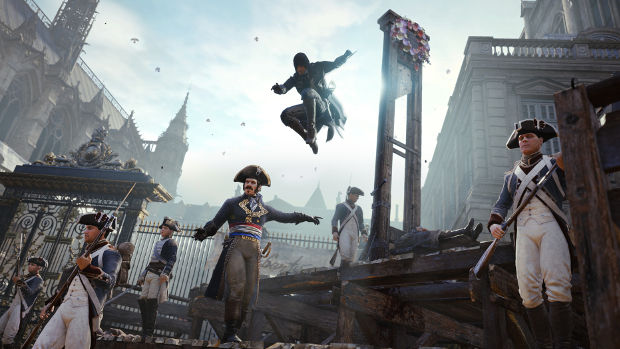 These stories aren’t necessarily events that you’ll personally see to (although, there’s surely many of those, as well). Rather, they’re the filler that makes Unity‘s world feel so alive. The crowds of people are thicker than ever before, and it’s not just people standing around. There’s genuinely a sense of disarray in the air. Most of them are gathered together and passively discontent. Others are just openly fighting the authorities in the street.

Choosing to intervene in these street brawls is optional, but it proved a fine place for Ubisoft to show off the changes made to the combat system. The largest departure is that the dependence upon countering has been removed entirely. In its place is a parry maneuver that will hopefully make Unity‘s fighting more skill-based instead of the predictable affair it had become in past titles.

The developers don’t necessarily hope that a player’s dependent upon combat, but its really up to the player. Want to go in aggressively and cause a full scale melee? Knock yourself out. Want to stick to the shadows like a true assassin? That’s certainly on the table too.

In the demo, the task at-hand was to assassinate an executioner that was sending revolutionaries to the guillotine in the city square. Opting for the stealthy approach, we got a glimpse of Unity‘s revamped climbing mechanics. Ascending the nearby rooftops, it became apparent that going down would be just as important as going down.

In Unity, a face button is assigned to upward moves, and another is mapped to downward maneuvers. Unfortunately, it was unclear as to how difficult it will be to tell when you’re able to descend smoothly. It’ll be a very useful addition if these paths are clear-cut, as it should vary the gameplay beyond “get to the top of everything.” However, if it leads to a lot of unintentional leaping to your death, it could prove incredibly frustrating.

Being an Assassin’s Creed game, rooftops will be a fixture of the experience. That’s perfectly fine, as there’s no better place to get an overview of the beautiful Parisian architecture as the city’s thrust squarely into complete mayhem. All of the buildings and scenery are wonderfully detailed and believable, surely thanks to development being moved to more powerful hardware. 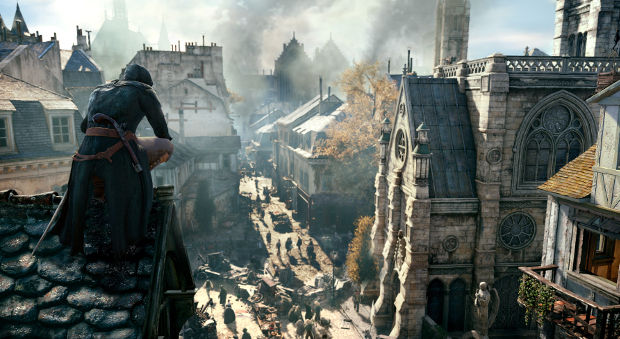 Rooftops have a new functional use, too. Standing still on a roof for just a second or so will pop up all nearby events on a sort of improvised heads-up display. It seems handy, as it eliminates the need to constantly back out to the map and mark a waypoint. Also, being Assassin’s Creed, it shouldn’t come as a surprise that there’s plenty to do at any given time.

One of the most important focuses for Ubisoft with Unity was the inclusion of cooperative play. Side missions are where this’ll play out. Each mission has a star rating to indicate difficulty, and co-op is never forced. However, we were told that a three out of five star mission would be very tough to complete alone, and that nothing would scale in difficulty to account for fewer people playing. 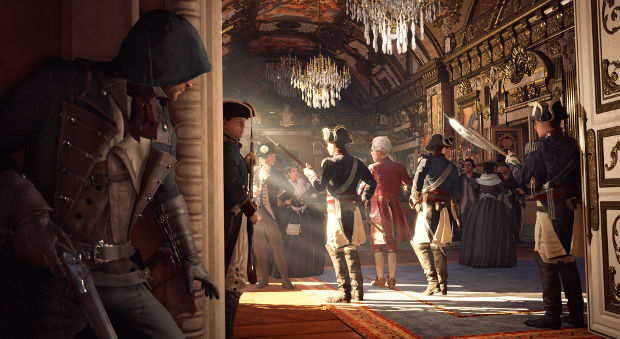 Interestingly enough, the main narrative isn’t subject to co-op. Possibly because this would cause too great of character dissonance accounting for who’s on-screen. Regardless of the reasoning, co-op only extends to the side missions, which obviously are entirely optional.

Cooperative play wasn’t being shown during the demo, however, so we were left to our own devices. Watching as the Ubisoft staff member gave the demo, we ascended a building, slinked across a rope, hopped to the structure on top of the guillotine, and dropped down to assassinate the executioner.

By the time that our hidden blade was in the neck of that unfortunate victim, it was clear that Ubisoft had no intention of straying too far from the Assassin’s Creed formula. Everything from past games was still in effect — some of them tweaked to great degrees, hopefully for the better. A focus on developing strictly for new consoles puts Ubisoft in a position to accomplish that. And, when it comes to capturing the setting Unity‘s aiming for, it’s hard to imagine a revolutionary Paris that’s more alive.