In a West End town, a dead end world

As the tenth anniversary for the Assassin’s Creed franchise draws closer, it’s hard to imagine the series has been around for so long. I was two years out of high school when Altair and Desmond first made their appearance on then-new consoles, and it was a world I was very much interested in exploring. Fast forward eight years later and after several installments, I’d still like to think of myself as a fan of the series. Even though every entry hasn’t left me quite satisfied — Brotherhood remains my favorite — I’m pleased with how things have progressed.

And now, we’ve got the Assassins traveling to London during the mid-1800s. As one of the most visually distinct settings from modern history, it’s a no-brainer that Assassin’s Creed would eventually find its way there. But the franchise getting here was quite the journey in itself. After several time periods, genre expansions, and an increasingly complex narrative, it’s difficult to guess where it’ll go next. So it’s quite the surprise to see the upcoming title go back to what earlier AC titles did best — offering a strong, satisfying single-player experience.

While spending some time with Assassin’s Creed Syndicate during a Ubisoft-hosted tour of London, I got to speak with senior producer Jeff Skalski about the development of the game, and their vision for the series’ debut into the dawn of the modern era. 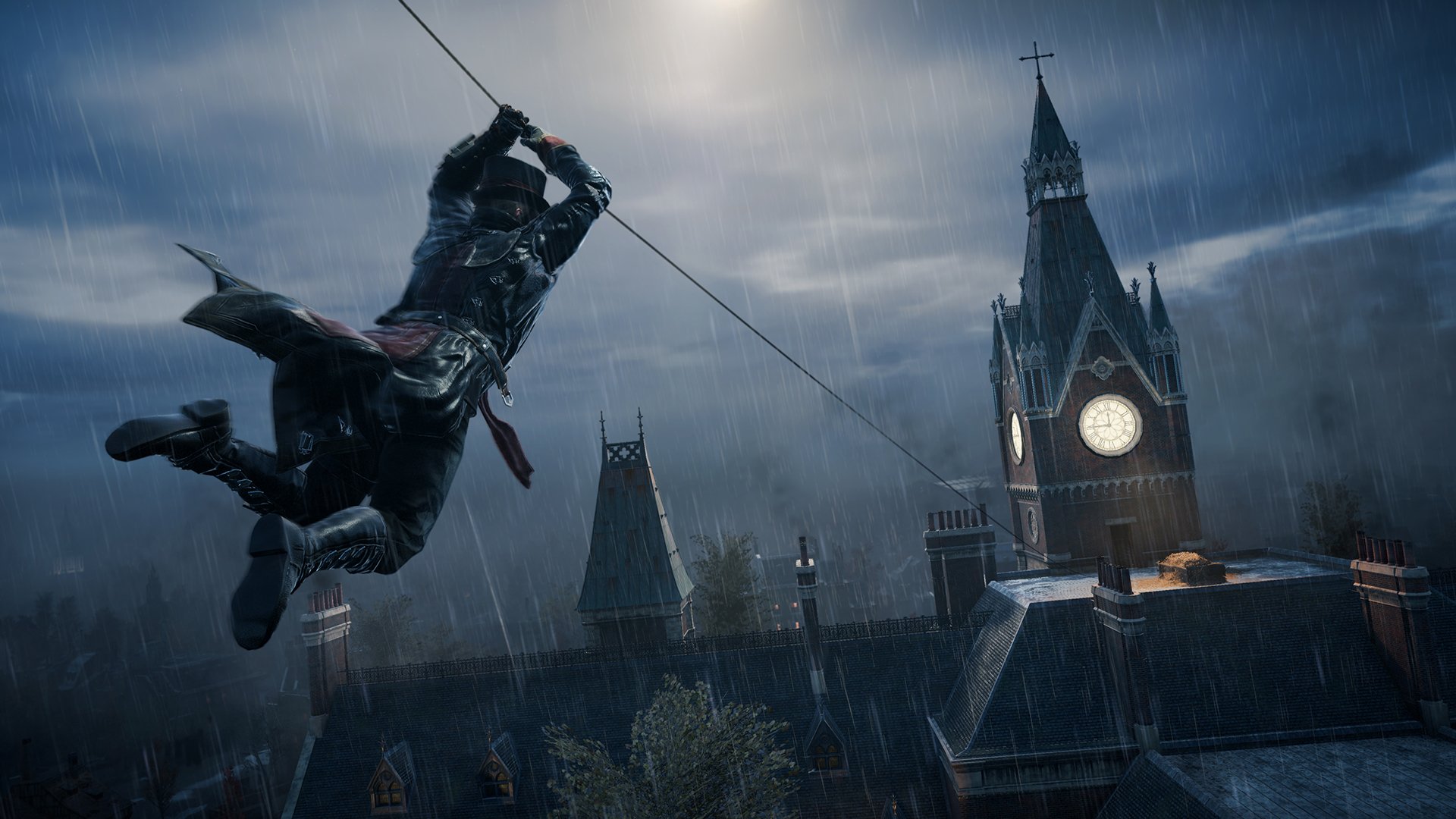 I’ve had an affinity for the AC series all the way back to the original. I remember getting hyped for an action-adventure title set during the Crusades, and then again for its follow-up in the Italian Renaissance period — two settings that don’t get much play from the medium. But ever since its move to the annual release schedule, I sometimes find it hard to get excited about new entries when they can come off as more of the same. While some of these games are off the charts when it comes to fun and offering an interesting setting to explore, Assassin’s Creed has missed the mark a few times.

Obviously, this presented Ubisoft with a challenge for how to tackle the upcoming jaunt through Victorian-era London. As one of the most-requested settings from fans, the developers felt extra pressure to get it right while making sure not to repeat the mistakes of past titles. As the ninth mainline Assassin’s Creed title (yes, already), it’s definitely a challenge to keep things interesting, because you can only play as an Assassin so many times without any major shake-ups before things get stale. Senior producer Jeff Skalski spoke at length about their vision for Syndicate, and how they hope the return to basics will reinvigorate the brand.

“That’s been a challenge for any game that’s been a franchise,” he said while discussing development. “Whether you’re working on the second one or fifth one, but for us, we’ve been working on this game for two and a half years, so there’s a lot of things we know about what Assassin’s Creed has done in the past. We have a sense of maybe where it’s going, but no one has a crystal ball. So we really evaluate what is important, where do we want to innovate, where do we want to focus, and then we kind of start building that game with that kind of mindset.” 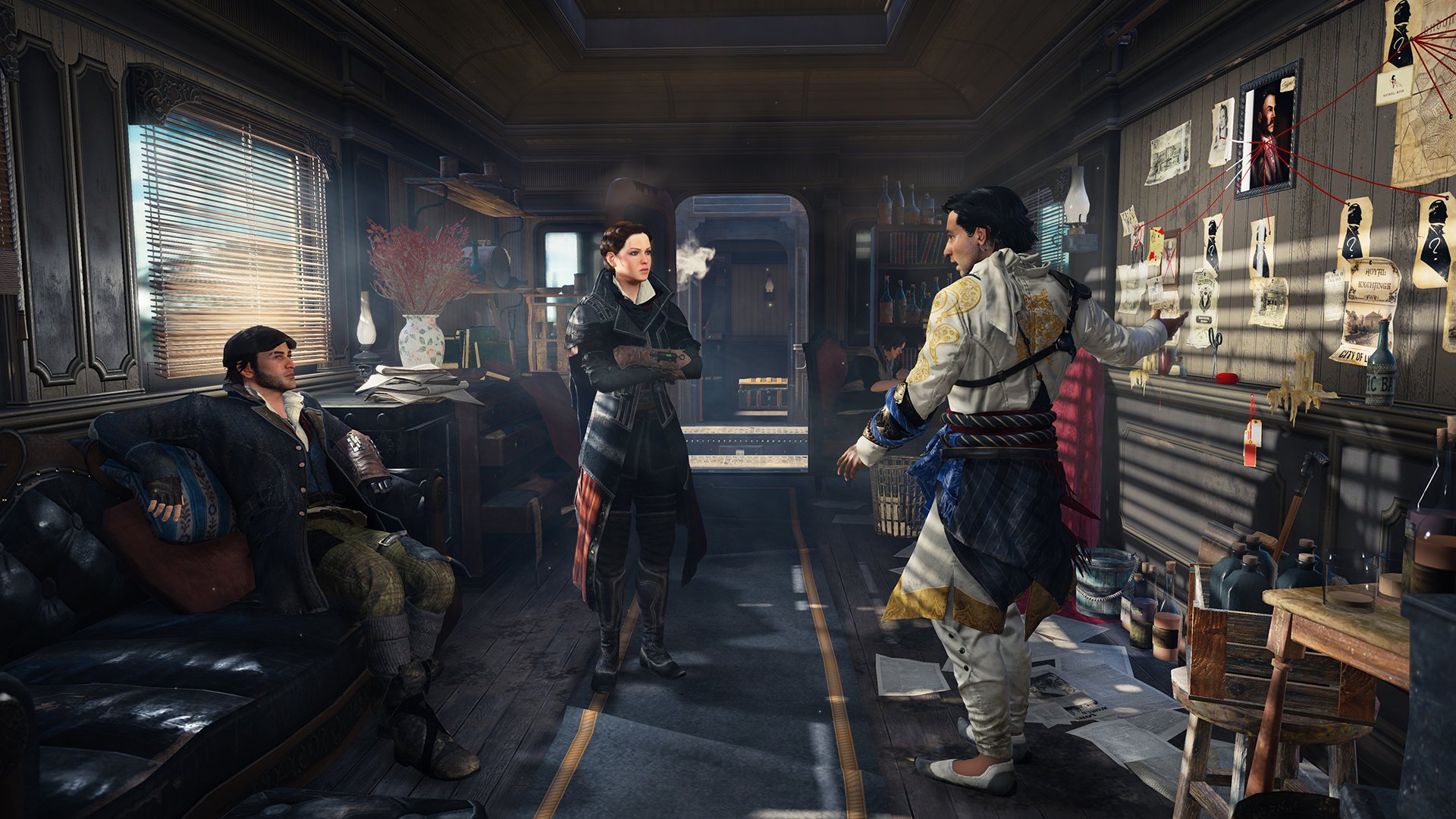 The elephant in the room when talking about this series is the troubled launch of last year’s Unity. While a solid entry in the series featuring  some gorgeous visuals and a stellar recreation of 18th-century France, this unfortunately, and quite understandably, was lost on many gamers who had to wade through technical issues and oddities that put a serious damper on the whole experience. While there are many reasons for how that turned out, the developers at Ubisoft Quebec wanted to ensure they nailed their interpretation and execution of the setting right at launch.

“We took a real kind of fine-tooth comb and we looked at the combat, stealth, what do we change that didn’t work so well, and we really evaluate it all,” stated Skalski. “We’ve all been fans of the game, we’re gamers first before we’re actually developers, so these are things that for us is an opportunity. We have one shot of building an Assassin’s Creed game in Victorian-era London, and it’s almost a dream come true for a lot of us. And we wanted to knock it out of the park.”

Even though multiplayer and other online components have been present for the majority of the AC titles, this marks the first time since 2009 that a main entry in the series will be strictly single-player. With 2010’s Brotherhood introducing multiplayer, along with the annualized release schedule, it set the standard for  titles going forward. So it was especially surprisingly to see that Ubisoft decided to brings things back with its focus on a pure single-player narrative. The studio made the decision early on to create a stronger narrative with denser content to back it up.

“When we were conceptualizing the game and figuring out what did we want to build, but more importantly what did we not want to build — because the more we built in the game, it means we’d have to stretch our resources thin — we really wanted to go all in on the single-player experience. That’s not to say we don’t believe in multiplayer, and I think there’s a place for that, but for this round we wanted to focus on the single-player. But yeah, we looked at the previous AC titles, and saw the various pillars they were built on, and thought ‘How can we improve this?’ […] So it was a very conscious decision, and it was one we made very early on.” 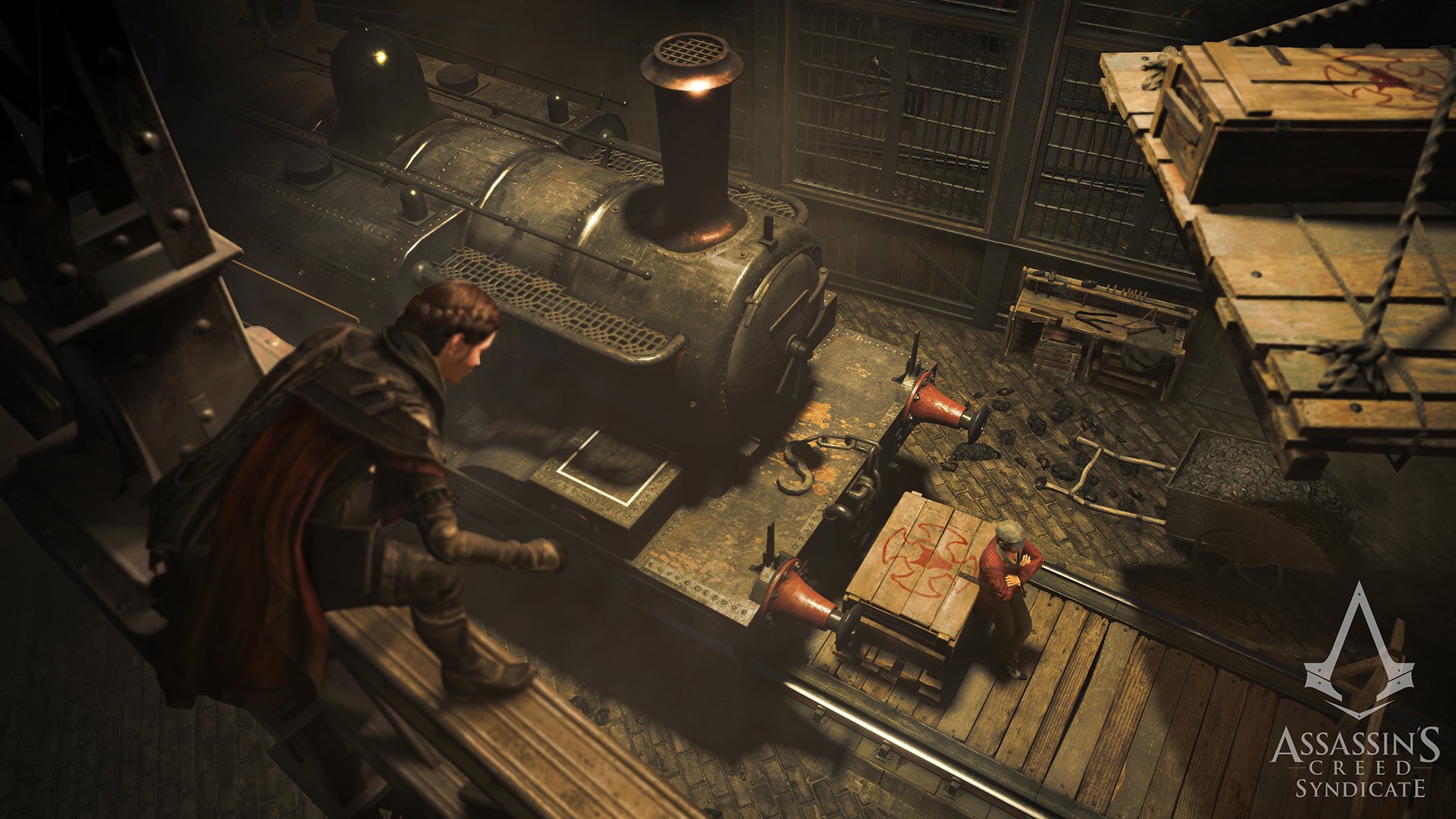 For me, one of the highlights of playing Syndicate, and I’m sure many will share this sentiment, was the setting. The Victorian era was an evocative period with the old world slowly shifting into the modern era before everyone’s eyes. And with the Industrial Revolution in full swing, it created many challenges for those living in the heart of the Western Empire. The devs saw this as not only an interesting setting that stands out among the predecessors, but also allowed them to open the gameplay into new areas and introduce abilities and gadgets not possible from the time period.

“There’s so much for us to play with in the Victorian time,” explained the producer. “As you stated, it was the turning point in terms of the modern society that we live in today, so we felt that was bringing something fresh and something very new, and allowed us to kind of break the rules in places that would be exciting for players. Even today, it’s a city that’s a melting pot of society, so we were not short on ideas. We had to pick our top-top favorites and realize those as best as we could and work with our writers to make sure it was accurate and authentic.”

Despite the gloomy atmosphere and depressing subject matter, Syndicate manages to display a lot humor from the characters. In retrospect, many of the AC titles portrayed their stories earnestly with some slight scenes for humor to break up the tension.  Syndicate‘s dual protagonists, who are brother and sister, share a kind of sibling rivalry and make constant jokes at their expense. I’d imagine with the bleak atmosphere, they had to offer some levity. Which thankfully works quite well.

“Humor was very important to us. As we were writing the game, and looking over the scripts, we were laughing, and that was a good sign for us. During mo-cap, I would laugh at lines and still find myself laughing when they came up in the game, so I hope players will enjoy the narrative, the characters — every one of them is super special — and the relationships they form with Jacob and Evie, and how they experience London for the first time.” 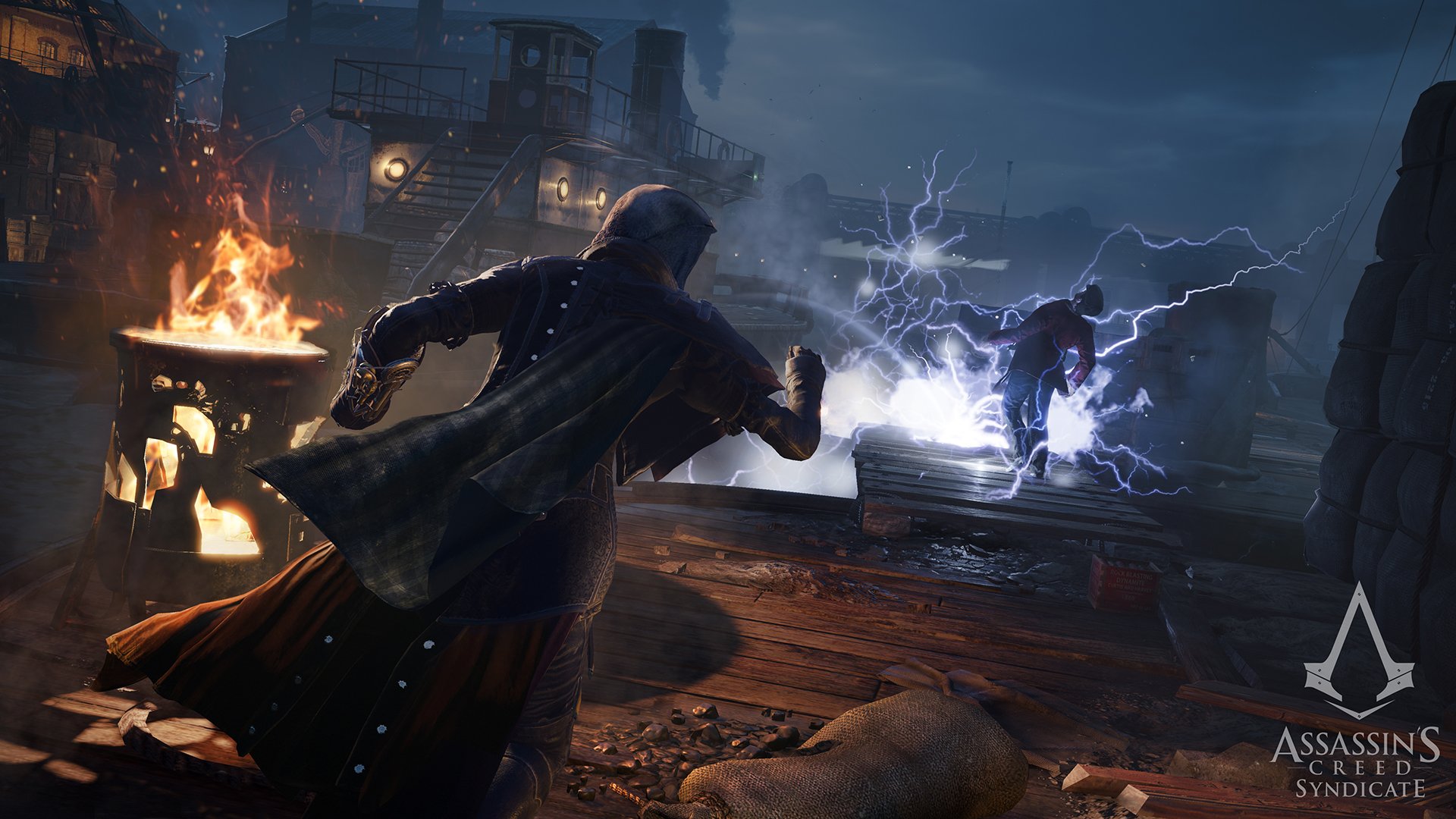 Since the reveal earlier this year, the creators of Syndicate (then titled Victory), had a bit of an uphill battle to get through to ensure they were all in when it comes to creating the next big entry for the series. Fortunately, my several hours with the game got my interest piqued for what’s to come.

What I enjoyed most about the era is that it felt as though it was stuck between two different periods — one from the past, the other towards the future. With many of the characters clinging onto the old ways while living in a civilization that has introduced vehicle traffic and gas and electrical infrastructure, Assassin’s Creed Syndicate‘s interpretation of Victorian-era London should be one of the more exciting, visually striking locales the series has seen in a long time.

For more info about Syndicate, check out my hands-on impressions.