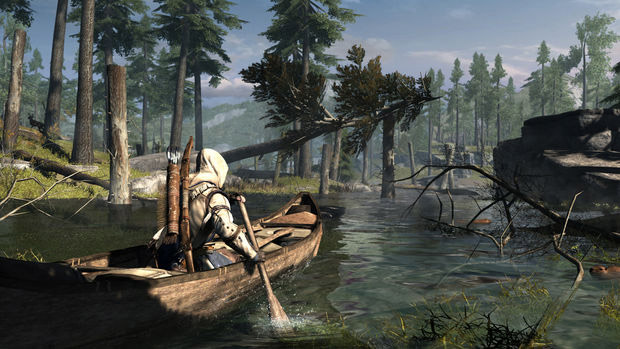 Following Ubisoft’s hefty day-one patch for Assassin’s Creed III, the company has another update in the works that is even more significant. Due out by the end of next week, this “Thanksgiving Patch” will work to improve a number of issues in both the single-player and multiplayer.

While watching Conrad play the game for review prior to full release, I was eager to get my hands on a retail copy, but haven’t yet had the opportunity to do so. Between all of these fixes, maybe that’s not such a bad thing after all. Some of these bugs sound rather nasty.

Multiplayer Modes
– ASSASSINATE – Instances where it was possible for players to kill players that were not their target in Assassinate have been corrected.
– ASSASSINATE – Bodyguards no longer fail to stun when they are locked by the pursuer of the player they protect.
– DEATHMATCH – In Fort Wolcott, fixed a bug where players would remained stuck on warmup screen.
– MANHUNT – The cooldown boosts for loss streak bonus are not permanently active for all abilities during a manhunt round anymore.

Multiplayer Abilities
– Loss Streak now correctly triggers when players lose their contracts five times in a row.
– Disruption now breaks the hitting player’s lock.
– The Smoke Bomb’s drop behavior has been updated. It now drops at the user’s feet instead of dropping in front of them. However, if players drop it from a ledge, it will drop below them.
– Throwing Knives used against players hiding in haystacks will now make them get out of this haystack.
– Using Throwing Knives against a target now prevents the target from contesting the kill.
– Players are no longer stuck after using the Money Bomb from a ledge.

Multiplayer Ladders
– Several issues which occurred when players would quit a Manhunt pre-session lobby and join their friends the same session later have been corrected.
– After a session ends on a draw, both teams will now receive the same rate for Abstergo ladder, instead of one team getting a winning rate and the other getting a losing rate.
– Players are now granted Abstergo points normally even if one or several players get the idle state at the end of the session (The idle players do not get any Abstergo points)

Multiplayer Misc
– It is now possible for players to lock their target when their target has just stunned them.
– Changing the ability set three times during a game can no longer reset the ability’s cooldown.
– The X icon no longer inaccurately persistently displays.
– It is no longer possible for players to get up and perform a kill under certain conditions while they’re vulnerable.
– Transitions to join Multiplayer sessions after an invite now work correctly.
– Warm up games are no longer interrupted when the host player leaves.
– It is now possible to stun a vulnerable pursuer.
– The X icon no longer displays above the pursuer’s previous target when they have been stunned after being vulnerable.

Location: Boston
– Removed map icon on the door of Molyneux Tavern in Boston, until it is required by a specific mission

Location: DLC
– Fixed a bug where the wrong language could be selected even if the proper language DLC is installed

Location: Epilogue
– Animus Synching tutorial, forced subtitles on off-camera voice, so that the player doesn’t think the game is frozen

Location: Frontier
– Fixed a bug where players could respawn and desync immediately in a loop if he died in the Valley Forge region before unlocked. Also patches players which savegame are already stuck
– Fixed a bug where the player could respawn under the ground in a loop, in two different places
– Plugged a hole in the ground where players could fall through the map

Location: Menus
– Added a wait message for some cases where the game could appear frozen if some servers are unresponsive
– Animus Database, fixed updates of Kaniehtí:io entry that would be unlocked too early and spoil the fact that… [censored]
– Fixed a bug where the player’s friends’ Uplay wall would get spammed by previously completed missions and sequences when the player reloads his game
– Fixed leaderboards ranking the player as #1 when he’s actually alone on it
– Homestead mission icons are now displayed on the map when selecting the “Missions” filter
– Present pause menu, fixed a possible glitch if the player enters the controls section and leaves it very fast

That last one is pretty funny.