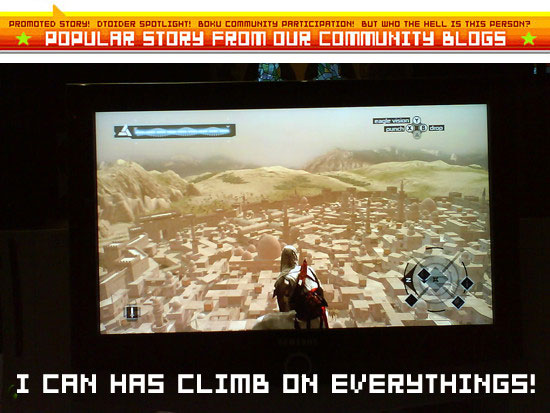 [Watch out! The Britcepticons are attacking! Today, we have Lauren’s hands-on with Assassin’s Creed, along with some swag that she’s giving out. Isn’t she so nice? — DMV]

Today I headed down to the “Crypt”, a small church near Chancery Lane. Cut off from the busy London roads, the venue was an ideal spot for a demo of the game. I was surprised by the perfect atmosphere the church radiated — I couldn’t wait to play! The event ran for about 5 hours and I arrived early nabbing some nice pictures of the setup before a small group of pre-registered press/community members arrived. Not only did I get to selfishly play Assassin’s Creed for 5 hours, I did manage to get t-shirts for you guys! Keep your eyes glued to future posts on how to win some!

Of course, I wasn’t playing the final build of the game. Ubisoft presented us the the unseen UK trailer and a general demo of the game. After a brief control explanation, we started off in a mission that was mid-way through, giving us access to five maps or so. The main objective was to meet up with other assassins’ guilds and do what needs to be done: assassinate.

However there was plenty to do: collect flags, fight guards, save citizens, investigate, carry out jobs for fellow assassins, and survey the city (which was my personal favorite). Not only am I climbing and jumping around one of the most beautifully crafted and interactive cities in any game I’ve touched upon, but when I get to the top of tower and just look around, all I could think was, “stunning!” I can interact with every building down there! Eagles and birds mark certain heights and how to interact with them. For example, a small flock of birds means that the ledge is a ‘leap of faith’ point — run over it, and you will automatically dive to the floor below (usually a hay pile). Eagles mark off “way points,” surveillance areas of the city where you could open more areas of the map to see what’s going on down below, eavesdrop on people, and save civilians.

After getting to grips with how the “GPS/Map” works and the game’s controls, I moved on to the battle system. There are things I like and don’t like about battles. I enjoyed the fact that the enemies have at least enough AI to not let you run in and hack n’ slash your way to victory — skill is actually involved. It’s just a shame that all that is put to waste with an easy to learn “counter” system. You slowly start picking off the pack by countering whoever lunges at you with a swift. and dare I say super cool, move. They throw in some minor touches, getting bitch slapped if an enemy manages to grab you, which I found pretty amusing.

You can use a variety of weapons: fist, throwing daggers, small dagger (available when you’ve ran out of throwing daggers), sword, and your Assassin’s knife. The Assassin’s knife was my most used weapon for running around and gutting throats of archers and guards alike. Once they turn their back, you run in and stab them right in the vital location of your choice: spine, skull, throat, or pancreas (OK, they don’t get that specific). Mmm, delicious bloody victory! Most guard battles push you to fight with a sword because of the swarm of enemies, but thankfully you can adapt and fight with most any weapon.

From what I’ve played, the game is beautifully crafted, and brings another high quality single player game to the field. Not only is the gameplay enjoyable and varied, it just looks bloody beautiful. I’d even say its worth buying just for sitting on top of buildings and leaping the faith out of them.

I’ll say it again: Assassin’s Creed goodies will be available to win in the near future (Friday) along with some other presents I’ve managed to nab along the way. There is also a video coming up on Friday from the event that I am not allowed to upload until then. It’s worth the wait I promise you! Stay tuned <3