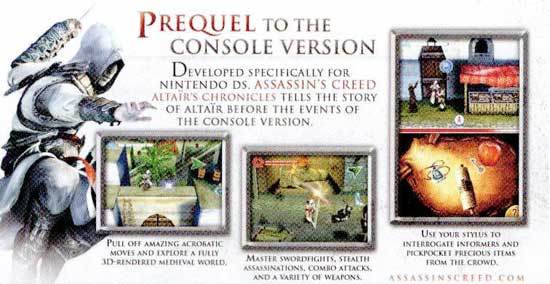 Having existed only as a listing on retailer release sheets, a lot of people were starting to think that Assassin’s Creed DS was nothing more than vaporware. Not the case, as a GoNintendo reader snagged some box art (which contains a slew of information about the game) from a local GameStop, proving that the game does indeed exist.

Officially called Assassin’s Creed: Altair’s Chronicles, the Gameloft developed DS title will take place before the events of the console version. As the screens and text tell us, Altair Chronicles features a fully 3D-rendered medieval world, where our little assasin will engage in sword fights and stealth assassinations. You’ll also be able to use the stylus for interrogations, which makes me really uncomfortable, if you get where I’m coming from.

The GameStop release list we got our hands on last month has the game listed for a February release, and hopefully we’ll hear more information before then. And before you start ripping this game a new one, I’m going to be honest with you guys — I’m really interested in trying it out. Gameloft developed some pretty killer Prince of Persia mobile titles that have gotten me through some tough times in public rest rooms. I’m trying to remain optimistic that Altair will get similar attention.