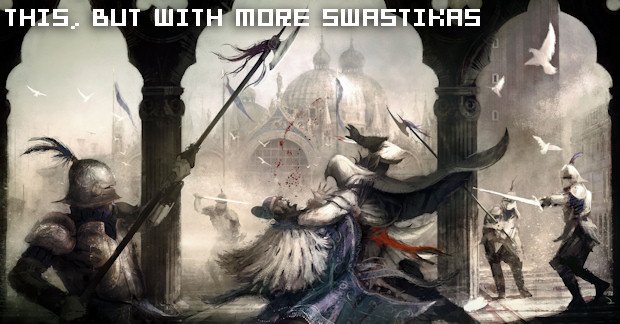 You know what we don’t have enough of? World War II games! But wait, don’t hang up just yet. Far from talking about making yet another generic Nazi-shooter, Ubisoft has apparently been discussing where to take the Assassin’s Creed series next. After stating that the next game could star a female killer, producer Sebastian Puel mentioned what kind of time period a woman should appear in.

“We’ve had discussions on that very topic,” he states, talking about a female assassin. “It could be really interesting but we’d need to find the right time period and place for that.

“Where would that make sense? We don’t want to just decide we want to change and have a female hero as the first inspiration is always the time period, but if you’re talking about, say, World War II the economies in England and France were run by women because the men were off fighting.”

Puel also talked about how easy the series is to expand: “I’m often asked if we’re doing a third game after ACII … I mean, we could do thirty-five of these.”

Knowing Ubisoft, I wouldn’t be surprised if they did release thirty-five of them … for starters. As for a female WWII assassin, I hope they learn from the mistakes of others first.