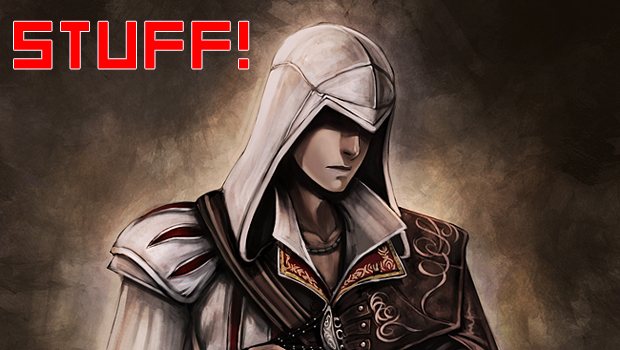 In case you’ve been too busy clambering all over Italy and lounging around your villa in Assassin’s Creed 2 to notice, there’s a little internet-online-tube-thing-service called “Uplay” lurking about. Hey, what’s that thing for?

Well, it’s Ubisoft’s latest attempt at providing a unified services platform for the games they make. Yes, another platform, separate from the PlayStation Network or Xbox LIVE, that they will give you content through. Stuff like this on the PC, I can understand since no one technically “owns” that platform (try as they might), but on the consoles? We’ll see, I suppose. Also, depending on how you pronounce “Ubisoft,” the service’s name might sound funny.

Why should you care about this still-in-beta product? Well, the service can net you some neat in-game goodness to reward your in-game deeds. You can gather up “Upoints” to trade in for free DLC unlocks. In Assassin’s Creed 2‘s case, you can grab five extra throwing knife slots, a costume to make Ezio look like Altair (in case you hate half-cloaks), and a trip to the Auditore family tomb. Why desecrate your glorious heritage? Why not?! There’s money in it!

Oh, you can also get a PC wallpaper (haha, but no) an Xbox 360 Dashboard Theme (eh..) and a PS3 Premium Theme (not Demon’s Souls, not interested). In case you don’t like any of the above, you can save your points to spend on Splinter Cell: Conviction once it’s out. Maybe Sam Fisher will get an Ezio costume. Classy!

And there you go. Just a little tidbit to get you (read: me) salivating while waiting for the game to come in the mail.