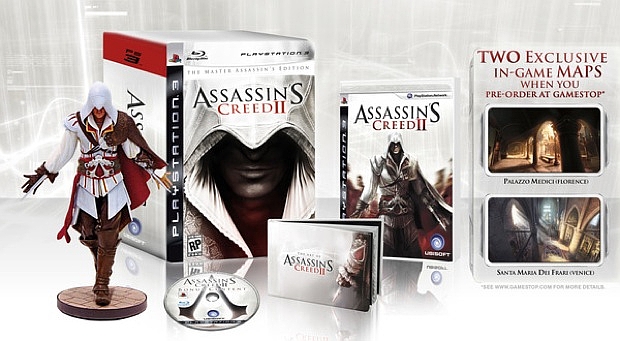 ALL UNITS. GameStop is offering more than exclusive downloadable content for Assassin’s Creed 2. Above this mess of text is a hot image of the GameStop exclusive Limited Edition version of the game, which was recently revealed by the guys behind the Assassin’s Creed Twitter feed. While we don’t have an official list, it’s probably safe to say that this special edition includes these five things: an Ezio figurine, a bonus disc of some kind, a huge box, a book, and a code for the GameStop exclusive content “Palazzo Medici.”

As Joystiq points out, this collection strikingly similar to the one offered for the original game. According to GameStop, the original special edition had these five items: a lead figurine, a mini-strategy guide, a tin box, a supplemental disc (containing behind-the-scenes footage and diaries), and Penny Arcade comics.

No word on price as of yet, but it’s hard to imagine this thing won’t cost seventy dollars (or more) like the original game’s collector’s edition.