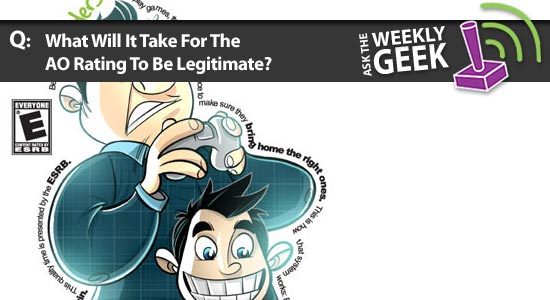 PAX knocked me on my ass, so it’s been a while, but welcome back to a brand new edition of Ask The Weekly Geek! This week, I will use my MASSIVE BRAIN to tackle yet another inquiry by you, the intrepid Dtoid reader. Prepare yourselves for a cranky rant about morality, it’s anecdotally delicious!

Q: What will it take for the AO rating to be legitimate and not just a death sentence? (Thanks, A New Challenger!)

Adults Only. What a strange rating to have. While the name implies that only mature, responsible people should partake in said rated media, it holds a deeper, darker connotation. Boobies. Gore. Swears. More boobies. Yes, a game marked Adults Only is sure to be filled to the brim with so much depraved material as to choke a horse (I believe horse choking also garners an AO rating). Most recently we have seen Rockstar’s Manhunt 2 scarlet letter’d by this AO mark of evil, which effectively banned it not only from stores like Wal*Mart, but from entire consoles as Nintendo and Sony’s policy is to keep all AO games off their systems. This is a major blow to Rockstar’s profits should the game be released, being that Wal*Mart owns the world, and Nintendo sells a metric butt-ton of Wii systems. So what is the purpose of the AO rating if it just functions as a way for the moral police to say what we can and cannot show in games?

A logical comparison would be to the MPAA’s NC-17 rating. Movies such as Showgirls and the South Park Movie were threatened with the deadly NC-17 tag, only to go back and cut out content in order to slide under the R mark. Most theaters won’t show NC-17 movies, and some stores (again, Wal*Mart) won’t sell the DVDs. Here in America, we are too hung up on what may or may not fall into the hands of children, and what is morally right or wrong for society as a whole. The only problem with this is that: 1. the rest of the world thinks we are fundamentalist nutjobs, and 2. we are fundamentalist nutjobs.

I used to work in the electronics department at an unnamed mega-grocery-chain-outlet-store-thing (okay, it was Fred Meyer) and I cannot tell you how many times I had parents come in and purchase games (and music) that were completely inappropriate for their children. I had one woman come in to purchase Grand Theft Auto 3 for her son, who was standing next to her, flitting about like a butterfly from the stacks of Yu-Gi-Oh! cards to the batteries back to the register. He couldn’t have been more than 8. The vacant look in the woman’s eyes showed me that she had no capability to understand reason, but I soldiered on anyway.

I told her that she should play the game with her son and ask him why he enjoys it. If she didn’t put this much effort into it, she really shouldn’t buy it for him. She then informed me that he would just play the game at his friend’s house, rolled her eyes, and paid. There is an interesting dichotomy here. On one hand, we live in a nanny state where parents expect game companies to be responsible for the content that their children are seeing. On the other hand, parents don’t really seem to give a crap. It’s a half-hearted hypocritical caring that is pervasive in American parenting today.

Is the AO rating really all that much of an issue, though? To date only a handful of games have been given an AO rating, and pretty much only for sexual content. Heck, most of the games are just Playboy screensavers or games called “All Nude Cyber“. Incredibly violent games get an M rating, while boobies (which over half the population have two of!) get you banned from pretty much everything. What the hell? The real issue here isn’t the legitimacy of the AO rating, it’s the strange moral standards that the ESRB uses to rate games. It’s the rating system as a whole. Does anyone really take the ESRB ratings seriously? When was the last time you heard a parent at a store say “Wait little Billy, let’s check the ESRB rating first!”

My point is that the rest of the rating system isn’t taken seriously or regarded as legitimate, so why should the AO rating be any different? It’s a joke. It’s our obsession with controlling what is “ok” for people to see, play, hear or watch. It’s America’s fear of new media — a theme repeated throughout the generations. When will the AO rating stop being a death sentence? When America stops giggling whenever someone says the word “penis”.

Chris Furniss is the editor and host of The Weekly Geek, a podcast mostly about video games. He is also a life-long fan of boobies. Ask him a question for next week’s column, will ya?