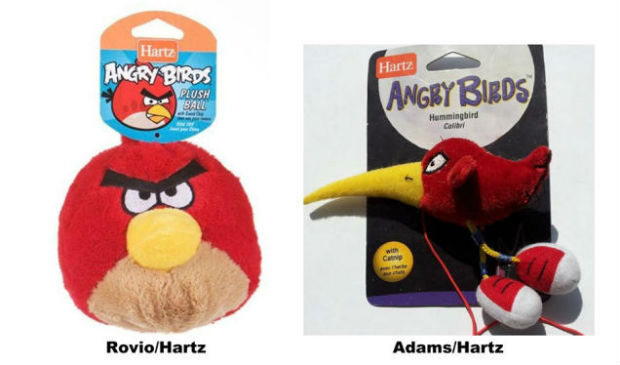 Welcome to the confusing world of copyrights and trademarks

Years before the Angry Birds videogame franchise took the world by storm, pet accessory maker Hartz partnered with Seattle artist Juli Adams to release a line of cat toys going by the name of Angry Birds. A lawsuit filed by Adams this week accuses Hartz of unlawfully taking her trademarked designs and turning them into a licensing partnership with the developer of the Angry Birds videogame line, Rovio.

According to a statement issued today by the attorneys representing Ms. Adams, Hartz Mountain Corporation approached Adams after discovering her work at a Pacific Northwest art fair in the mid-2000s. Adams was asked to create a line of pet toys based on her unique style. The result was a line of toys that looked roughed up and angry with the knowledge that they were going to be dragged around by the cats. The name she came up with for the line was “Angry Birds.”

The lawsuit dictates that Hartz entered into an agreement in 2006 that there would be no transfer of ownership of the Angry Birds property from Adams to Hartz. In March 2007, Hartz filed a trademark for the “Angry Birds” name as pertaining to pet toys which still stands today. The lawsuit claims that Hartz used its trademark to enter into a licensing deal with Rovio for an line of toys based on the Angry Birds game franchise in 2011. Adams’s designs were swapped out with characters from the Rovio game and no further royalty checks were sent to her.

In addition to unceremoniously discontinuing her designs, Hartz also told her that she could no longer use the name “Angry Birds” due to the existing copyright Hartz had on the name used for pet toys. Adams is now seeking compensation based on the revenue generated via the trademark.

Adams’ lawsuit only targets Hartz and she has no quandaries with the use of the name “Angry Birds” associated with the videogame franchise from Rovio. Her issue lies with the use by Hartz of her intellectual property to sign a deal with Rovio without her consideration and without giving her compensation.