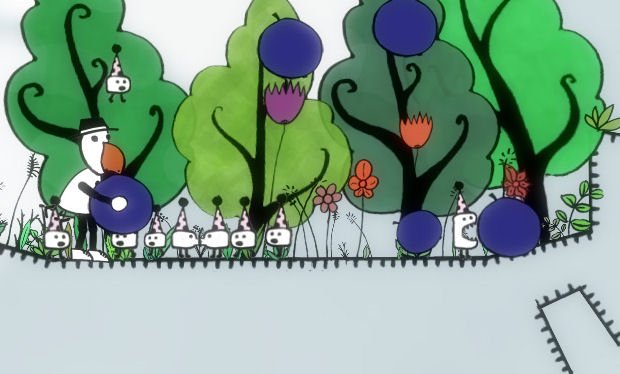 So, the article I wrote a while ago concerning indie games and art caused quite a stir in the industry. The debate that arose from it was very interesting indeed. Some members of the industry liked it. Some members of the industry did not. Some took what I said personally, some brushed it off as the ramblings of a man who missed the point. Still others said very interesting things that, I feel, betray the underlying problem of the “games as art” argument.

The most perfect example of this problem came from G4TV’s Sterling McGarvey, who I briefly mentioned in a more humorous post. His response to the whole debate was one that, I think, truly sums up my major issue with those who defend art games.

“I’ll take a ‘pretentious artsy-fartsy indie game’ over creatively bankrupt bullshit any day,” is what he said.

Now, McGarvey’s comment was but one of many that shared similar sentiments, but it was a perfect snapshot of the big fallacy among those who stand up for art games — this idea that art games cannot be creatively bankrupt themselves, and that if you are against the indie crowd, you are against originality. This also leads onto a further incorrect but all-too common assumption — the idea that because something is innovative, it is automatically good.

I am not against originality in gaming, nor am I against games that strive to be perceived as an artistic endeavor. I do, actually, consider all games a form of art. They’re a creative expression, and they have the potential to be emotionally engaging or possess gripping narrative. I am also a big fan of originality. I love it when games are innovative, either from a storytelling or gaming perspective, or both. However, the main point of my original argument, something that I think a lot of people missed, was that many art games on the market are not all that artistic, and they’re certainly not original.

The very basis of my argument was that these “art” games all acted in the same way. They were vague with their rules, they had intentionally cloudy and obscure dialog, or vast sections of “gameplay” that were devoid of direction or compulsion in a deliberate and forced attempt to appear introspective. This, my friends, is where the real bones of my umbrage lie. My assertion is that a considerable volume of art games are no less creatively bankrupt than your average Triple-A retail first-person-shooter.

We seem to be stuck with this incredibly false idea that indie games = originality and AAA games = uncreative garbage. This is simply not true, and I think it allows indie developers to be incredibly lazy and slapdash with their ideas, safe in the knowledge that their game will get a free pass for innovation, when all they did was follow all the other indie games out there.

Take Edmund, for example. Edmund is a fine example of an intellectually lazy, uninspired game that has done a good job of hoodwinking its audience into believing that it is an artistic triumph. Edmund is a game about a rapist. He’s the main character, and you will have to beat and rape a woman during the course of the game. Sure, that’s very shocking, but is it very clever? Not really. Like many of the art games I railed against in the last column, it’s really not all that innovative. The rape exists seemingly to shock for the sake of shocking. That’s something that books, films and even music have been doing for years. Putting a violent rape in your game is an easy way to make jaws drop. It might be unique for a game, but in terms of art, it’s practically a cliche.

When we look at the non-rape parts of this game, we realize that it’s nothing we haven’t seen from a dozen indie games in the past. 8-bit visuals? Check. Retro graphics are a huge trope of the indie scene and have found their way into plenty of art games. Remind me, please, of what is so creative about that. I’m not saying retro graphics are inherently bad (you don’t have to be creative to be good), but let us not pretend they haven’t been done a hundred times before. Capcom, a maker of so-called “creatively bankrupt” games has exploited 8-bit visuals with Mega Man 9 and 10. So much for artsy fartsy games being more unique than the bigger boys.

Edmund‘s gameplay is similarly lacking in the creativity department. Most of the “experience” is simply moving from left to right. One half of the game involves some drearily simplistic platforming as Edmund jumps over landmines, but that’s about it. Like many art games, it’s boring and features vast tracts of doing nothing at all. Takes us right back to The Path, The Void or even Passage and Blueberry Garden. Games where you just walk and do nothing, thrown into something devoid of interesting features and told to figure it out. Again, tell me where all this supposed creativity is.

My main point is that a game is not “original” or “innovative” just because it has an arbitrary amount of dollars in its budget. A game like BioShock, for all its AAA production values, has more originality in it than something like Edmund or The Path. It tells a great story, and has some really cool and rare gameplay. I wouldn’t call BioShock creatively bankrupt. I wouldn’t even call Halo creatively bankrupt, and that game is a landmark in the “FPS space marine” genre, henceforth regarded as the most over-saturated genre of them all. I don’t personally like Halo, but it told an original tale and featured a rich universe full of history that a lot of fans really got into. I think that’s more clever than a game with no backbone to its premise whatsoever.

Then we come to the second fallacy, the idea that innovation is somehow a mark of quality. I already addressed this issue a while ago, but it’s worth reiterating once again. Innovation should not get a game a free pass. Just because something is original, that does not automatically make it brilliant. The idea may be genius, but if the execution is off, then you need to be honest enough to say the game failed. Again, I bring up The Void, with its wonderfully bleak atmosphere and haunting premise, juxtaposed against its unclear gameplay, lack of direction, and its need to punish players for the crime of needing some unique mechanics explained properly.

Taking a page from the Triple-A playbook, Mirror’s Edge was regarded as a hugely innovative title, and many people overlooked the fact that it didn’t actually work properly and players frequently died through no fault of their own. Mirror’s Edge is a fine example because it demonstrates not only that a major publisher’s games can be innovative, but that innovation is not always great. It’s the ultimate example of the falsehood that surrounds art game debates.

Heavy Rain is another fine bit of evidence. When I criticized the game and gave it a less-than-perfect review, there were plenty of naysayers on Destructoid and around the Web who accused me of hating innovation. There is a very poor Web site called Criticosm that pretends to be a place where people can review reviewers, but is really just another outlet to bitch about review scores. That Web site provides a huge amount of resources for anybody interested in people who are completely wrong about videogames.

“He obviously wants a steady diet of no-brainer cookie-cutter games that follow every conceivable cliche,” writes one whiner, regarding my Heavy Rain review. “When a new and innovative game like Heavy Rain comes up, which by the way happens very rarely, he kicks it in the shin, and when gaming companies evaluate financial performance, they are discouraged to try anything new and we get our next portion of bland and generic games.”

This is a beautiful example of this sheep-like mentality surrounding so-called “innovative” games. For a start, Heavy Rain is not unique. Like most “artistic” games, it provides an illusion of innovation. It’s essentially Dragon’s Lair for adults, and the story is not that unique when compared to movies. It’s not often done in games, I grant you, but Quantic Dream did nothing that hasn’t been done in the world of art before. However, my main criticism of Heavy Rain is that its story was badly written, and for a game built almost entirely around the plot, it needed to be picked apart. It wasn’t because the game was innovative that I was so unforgiving. It’s because it was not as brilliant as it thought it was, in spite of its innovation.

Claiming that a critic “hates innovation” is simply an easy way out. It’s very easy to make that claim and feel like you’ve made a point, when really you’ve done nothing other than betray your own ignorance with a presumptuous and false knee-jerk reaction. I am pretty sure that no videogame critic exists who hates a title just because it is new, and despises all games that try and do something different. Nobody sits there, deliberately defecating on games like Heavy Rain because they want nothing but first-person-shooters on the market and go out of their way to destroy any other type of title. The critic who hates innovation is more of a boogey man than anything else, a nice fictional beast upon which gamers can paint the faces of their least favorite reviewers.

So we come to the title of our editorial, “Art games aren’t innovative and innovation isn’t good.” Am I saying that all art games are unoriginal and that all originality is bad? No, I am not. What I am saying is that an art game, by itself, is neither inherently original nor unoriginal. Likewise, innovation, by itself, is neither good nor bad. You can’t simply say art games are original, because there are plenty that toe the line and copy each other. You can’t say innovation is good because plenty of innovative games have failed, either tied up and lost in their own ambition or placed in the hands of developers not skilled enough to do the unique idea justice.

In the same way that a knife can be put to good or evil purposes depending on who is holding it, a game can be great or terrible depending on who makes it. It’s not about the genre, or the budget, or the fact that it turns established gameplay ideas on its head. A bad game is a bad game, and I think it’s intellectually dishonest to act like big budget games are incapable of being unique while art games are original and wonderful by no merit other than the type of game they are. Let’s judge these things on their own merits. That’s what I did during my last editorial on the subject, before everyone else pulled out their tar brushes.

So no, art games are not innovative and innovation is not good. Not on their own.