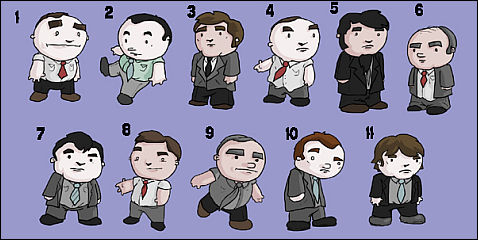 It’s good news/bad news time again. Bad news first: for the next few weeks, I’ll be borrowing Art Attack Friday from the infinitely more sexy and attractive Hamza”CTZ” Aziz. The good news: I come bearing gifts — namely, an exclusive look at some original artwork for Braid, by none other than indie darling Edmund McMillen.

Edmund did all the near-final character design and art for for Braid except for the game’s first boss. At some point, Jonathan Blow (Braid‘s creator) hired the game’s other fantastic, amazing artist, David Hellman, to paint over or otherwise alter nearly all of Edmund’s work so that they would match the games backgrounds.

Personally, I like Edmund’s style a lot more. David’s version of Tim was (and still is) a big turn-off to me. He’s realistically rendered enough to give me that “uncanny valley” feeling, while remaining baby-proportioned and pseudo-cute in a way that comes off as generic. Worse still, his blank, permanently optimistic expression actually gives me the creeps.

In contrast, Edmund’s designs for Tim are clean, expressive, and far from generic (by videogame standards, anyway). His Tim is clearly an adult, not a doll, yet he remains “cute” and easy to relate with. Not only does it look like I could draw Edmund’s version of Tim, but I sense that I know how this Tim really feels. Where Hellman’s Tim is Chucky, Edmund’s Tim is Charlie Brown.

That’s my opinion, anyway. What do you think? Which Tim do you like the most? Also, hit the jump for an exclusive look at Edmund’s version of Tim in motion, and tune in next week for more exclusive, never-before-seen Braid art from McMillen.