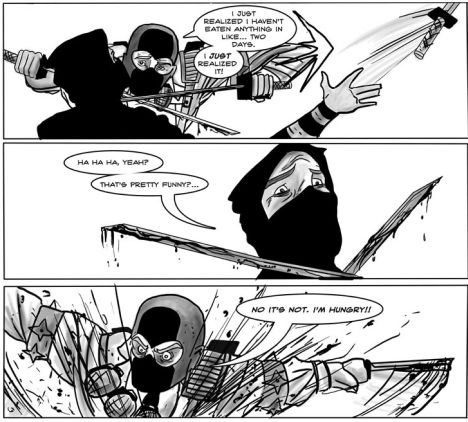 I am a ninja fanatic. In fact, one of my life goals is to have sex in a ninja outfit (either me, the girl or both of us in the outfit, doesn’t matter). So it should come as no surprise that the comic I’m featuring today is all about ninjas. The whole concept of Dr. McNinja started up over at Something Awful in 2003.

Q: That’s a pretty kooky name, Dr. McNinja. How’d you come up with that?

A: Well, way back in 2003, it was originally just my Something Awful forums name, and it was really close to being Dr. McNuggets. (I had a bit of a thing for them back then. I also like claiming to be a doctor.) But last second before registering, I realized I could kick up the awesome a pretty decent amount by changing the”Nuggets” to “Ninja.”/p>

How does one go from a alias to a comic?

Well, over at Something Awful, there are these uh… drawing fights, I guess is the best way to put it. You draw up a characterization of your user name and then you draw him/her fighting the other people’s characters!

OK, enough copying and pasting the about page.

The good Doctor has fought with many enemies. From Ronald McDonald, to the disease Paul Bunyan’s Disease, pirates, Raptor Bandits-Rupert Murdock’s Myspace-and um, Ronald McDonald again . Right now, the story arch is in the middle of Dr. McNinja fighting off the most feared warrior to the ninjas. Oh, and the army of teens who took ninja drugs that turned them into ninjas. Neat.

So check it out. It’s really good and … (oh crap! This doesn’t have anything to do with video games! Crap! Ummmmm … I KNOW!) I’m sure you’ll all get a get a kick out of  the name Dr. McNinja gives the pet velociraptor. And if that’s not a good enough reason to talk about the comic on a video game blog, then I don’t know what is …