[Art Attack Friday is your weekly look at videogame fan art created by a talented artist.]

Let’s be honest here: calling Jalonso’s pixel pushing “fan art” is a bit misleading. Looking at his work, you can tell that he’s a fan of games for sure, but his art is a little different than just drawing pictures of Link and Samus (not that there’s anything wrong with that!). To boot, unlike many of the artists featured on Art Attack Friday, Jalonso has done a bit of commercial art — and it shows, since his pixelart is incredibly badass.

There’s more from Jalonso after the jump: why he only works on games he’s invited to join, pixel art as a hobby, and some of his commercial projects (featuring The Protomen, of all people).

Before you go any further, I should warn you that our gallery has a bad habit of squishing and squashing pixels. To get a real idea of how good Jalonso’s art can be, you’d do well to check out Bugpixel, his personal site and gallery. 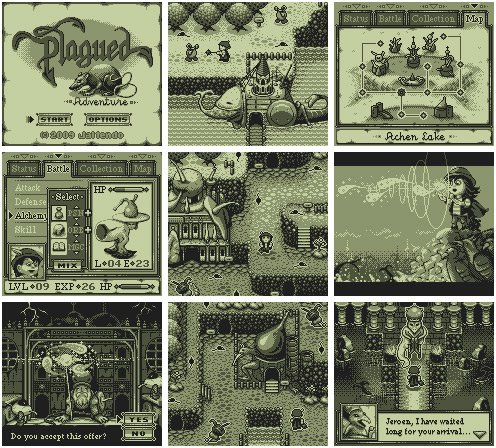 What originally attracted me to Jalonso’s work was his Gameboy RPG mock-up for Plagued, based on the life of Hieronymous Bosch, a 15th century Netherlandish painter. The mock-up was originally created for a weekly challenge at Pixeljoint to celebrate the 20th anniversary fo the Gameboy.

“Bosch’s Garden of Earthly Delights was a good alternative because the painting has so many details that lend themselves to game sprites, enemies and other gameplay elements,” explains Jalonso. “I envisioned the game story to follow some unearthly quest for higher knowledge of some kind. Although Bosch did not create the art during the Plague, I set the game in this context because it added an air of gloom.” Although it’s just a mock-up, Plagued fits Gameboy specs to a T, except for the main character sprite. 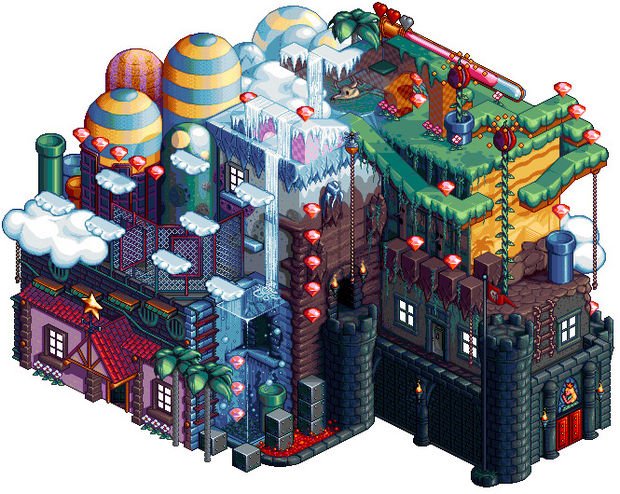 Jalonso started doing pixelart as a hobby on his Mac Classic, and the hardware and software limitations had a direct impact on his art: “The software limitations forced me to focus on pixel placement and precision and this has never left my pixelart,” he explains. He got his start making icon sets for Iconfactory, but eventually started getting invites to do game art. Pixelart’s status as a hobby hasn’t changed over the years, even though Jalonso has been pretty successful with “pixel pushing,” as he calls it: “[T]o this day I only get involved in projects by invitation exclusively. I treat pixelart as a hobby even on commercial projects and will only get involved if the game specs are attractive to me and its something I would enjoy making,” he says.

His commercial endeavours include the album art for The Protomen’s Make Up and Vanity Set Present: The Protomen album, Chariot Chasedown (a promotional game for The Mummy: Tomb of the Dragon Emperor), and art for a Reader’s Digest article about Asia’s “noise epidemic,” as well as maps for Sunset Jamaica Grande resorts.

Jalonso’s work is very technical, and it rubs off on how he perceives and appreciates other artist’s work: “When I look at other’s pixelart I don’t really care for idea/concept but tend to look and study the techniques used and the technical aspects of the art.”

For better or worse, this applies to the games he plays as well. “I have always been a huge fan of the Castlevania series. The pixelart in Castlevania games is some of the best ever made. Naturally, Metal Slug is an inspiration and aspiration to all pixel pushers but I hate playing the games themselves since I can only ever focus on the art itself so death comes often,” he explains. He’s also playing Castlevania: The Dracula X Chronicles, which he seems to enjoy — of course, it conatains pixel-perfect versions of Rondo of Blood and Symphony of the Night. “I got the game for these titles but have found the non-pixel game great too…”

No word on what his next project will be, but I’ll be keeping an eye out. Again, I encourage you guys to check out Bugpixel.com — it’s got all of his art in their native resolution as well as links to all sorts of pixelart projects.