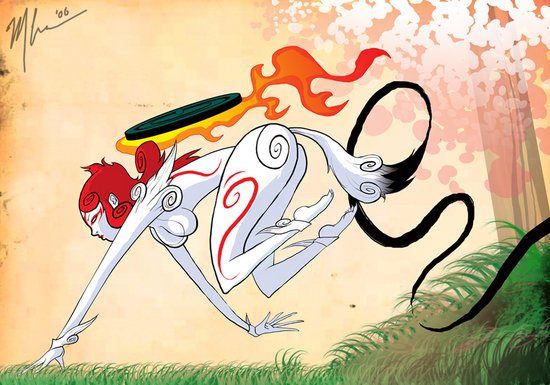 Like YTMND Thursday last week, I had to sacrifice Art Attack Friday because of the insanity that was E3. AAF is back this week, and I have to say this is my favorite edition yet. This week, I have the pleasure of presenting to you Marques Cannon, otherwise known as Guitar Atomik. You’ve probably seen him buzzing around the Community Blogs as well as seeing his STFUAJPG shirt go on sale this past week.

Hit the jump to check out Guitar Atomik’s amazing art pieces as well as the interview I conducted with him where he talks about his art style, how he started, what to expect from him in the future and tons more information.

DESTRUCTOID:It’s a great pleasure to talk to you Marques. Before we dive into the questions, please introduce yourself to the Destructoid community.

GuitarAtomik: I am Marques Cannon otherwise known as GuitarAtomik. I draw stuff for a living. I am 24-years-old living in Sarasota, FL (Home of the Greybush) and I am a graduate of the Ringling School of Art and Design. I majored in Illustration (after quitting out of Computer Animation) and I now do freelance artwork for whoever will pay me. Whoever at all … except furries.

Too bad Nex! I pretty much always wanted to be an artist since preschool. I was the only one in my class who would draw the 4 legged dinosaurs with foreshortening and that’s when my parents knew I was special. I flirted with the idea of becoming a paleontologist in 2nd grade (see a trend here) but I always knew I’d end up drawing for a living

How did you come up with your unique art style?

I’m really into cartoons and comics so I’m all about capturing images in motion. A lot of the stylization I do is me trying to make something look like it could be in motion. Like right before or after someone gets punched or something. Dynamic pictures are just cooler to look at and they’re a hell of a lot more fun to draw.

With your art style, I see that you love to take very well known male videogame icons and turn them into females. Why is that?

It all started as my senior thesis at Ringling School of Art and Design. I couldn’t think of what to do and I had to get it approved before I could start. So I sat down and thought about what I love to do (videogames), and then an interesting twist to make it a cohesive set of pictures. I decided on turning popular male characters into females since I had just started getting into drawing pin up girls. It gave me a chance to redesign the costumes which I love doing for some reason, and I knew I could change up my art style for each one so I wouldn’t get bored of the idea.

What are you currently working on?

Right now art wise, I’ve been working on a Gitaroo Man piece and I may or may not give him the Video Girl treatment too. I’ve also been working on some new Cyborg Dinosaur t-shirts, which I will get printed one way or another. I’ve been focusing a lot on t-shirt design lately since I would really like to start a line of my own someday. Also, PwnyBownz (of Dtoid) and I have been collaborating on a possible animated short about a half space dinosaur/half Henry Rollins character who comes to Earth to play a show and subsequently decimates the Earth in the process.

The Internets is patiently waiting for Threadless to approve of the Triceratron shirt. What other types of dinosaurs do you want to use?

All of them! Well most. I did a sketch of a T-Rex the other day with a giant revolver strapped to his head which looks hilarious, and another one with a Stegosaurus that had these giant ridiculous Klingon style blades attached to each of it’s spikes. I really want to do a space Plesiosaur too just so I can put the astronaut bubble on it’s head. Eventually I want to make just one shirt with like 10 dinosaurs battling their asses off for supremacy. There can be only one! It will be epic

Epic. I cannot wait. Sadly, I have to wait. Luckily, you do have other shirts on sale. The Destructoid store was just launched and we have your STFUAJPG shirt. You also have a couple of other shirts on GlarkWare. Can you explain how you came up with the ideas behind these shirts?

Well the actual ideas were given to me so I can’t claim total credit for the awesomness that is Nun-Chucks. Basically Glarkware told me the concept and then let me run wild with it. I based the Nun-Chucks a lot on Bruce Lee and then tried to make her in motion as much as possible because that’s how I roll. There’s a little bit of Frank Miller in there too. Also, all nuns should learn to battle. For discipline.

Indeed. What about the other two shirts?

The Double F Ranch is actually a remake of another Glarkware shirt that they wanted me to make cooler. The STFUAJPG shirt is based on Phoenix Wright and his famous “OBJECTION!” pose. I thought if the Dtoid robot ever yelled that to someone, that’s how he’d do it. And then he’d find a way to Rick Roll them somehow.

Yeah, we’re really good at Rick Rolling people. Do you have any other merch you’d like to force down our wallets?

Well, I have prints for sale on my DeviantArt of the entire Video Girls series. You know you want 5! Other than that, I’m working on a CD based on video games but that probably won’t be out for a while. I’m doing all the art for that too of course cause it’s free to hire myself.

That’s right, you’re also a musician. What made you get into the music scene?

I’m about as obsessed with music as I am art so I’ve always kind of wanted to get into making it. When MTV Music Generator came out for PS1, I really got into it and made an album worth of stuff. Ever since then I’ve been working on music about as much as my art and I’ve been trying to converge the two.

How many songs have you released? Are all your songs mostly related to videogames?

Under I KILL PXLS, I’ve only released about 6 songs to listen to on MySpace, but I have at least 10 pretty much done for the album I’m working on. It’s all based on videogames though, sometimes more loosely than others. I should have a Destructoid theme song up soon for the contest. Jessica Chobot had one of them up on her MySpace for a while.

So this is a one man band right? What do you use to make the songs? (If you say a videogame like MTV Music Generator, then I’m going to have to jump off a bridge because I wouldn’t be able to handle your awesomeness levels).

It’s a one-man band thing. I’ve moved up from MTV Music Generator and graduated into this program called Reason. You can make some awesome vocoded robot voices in that program. There used to be this brother sister band that exclusively used MTV Music Generator for their beats but I don’t remember them being very good actually.

What are some of your favorite pieces you’ve done, both in music and drawings.

My favorite drawings are probably the Devil May Cry one since the jacket and pose turned out cooler than planned, and the Okami one since I feel like it’s an awesome visual image. Music wise, I’d have to say the song “What Would Jack Thompson Do?” about everyone’s favorite lawyer, and “These Streets of Rage” since Yuzo Koshiro (composer for Streets of Rage) is my hero and I think that song was a fitting tribute.

Awesome.  Is there anyone that really helped inspire you with your art and music?

Yeah! Just about every comic book artist I’ve ever liked growing up were tremendous influences on me. I use to steal parts of styles from different artists like Mike Mignola, Jim Lee and Jack Kirby and twist them and adapt them into my own. There’s a lot of manga/anime influence too from Masamune Shirow, Akira Toriyama, and then more indie artists like Ippei Gyoubu. I think that’s why I can do so many different styles now since I never stuck to any one for too long. Musically, it comes from everywhere since I’m pretty much into anything as long as it sounds good. I’ve been influenced a lot lately from dance/electro acts like MSTRKRFT and Goose. Of course videogame music plays a lot into that as well.

Alright, to wrap things up what, does Guitar Atomik mean?

Guitar Atomik came from this comic I was creating a long time ago that I never finished. It was going to be about these guys who had powers and fought with weapons based on musical instruments like an Ax Bass, or Sword Guitar, or some other ridiculous shit like that. I was very into Fooly Cooly at the time so it was going to be in that vein, and part of my plan was to release a soundtrack alongside it. So thinking along the lines of ridiculous manga names, I came up with Guitar Atomik based on that.

Wow, it’s a shame you stopped working on it.

Yeah, I still might finish it up some day. I really want to make it into an animation whenever I learn how too.

I’ll be looking forward to it then. You said you’d like to do work from anyone who can pay. How would the readers go about contacting you?

You can just e-mail me at [email protected]. That’s my strictly Biznass mail. Daddy needs a new HDTV.

Any advice you’d like to give to the readers who want to do something with art, music and life in general?

Yeah, just do what you like and have fun with it. If you want to turn it into a career, learn the business side of it all since that will be invaluable to you. Also, put yourself out there as much as possible and be relentless about it. Someone will take notice. Also, cocks.