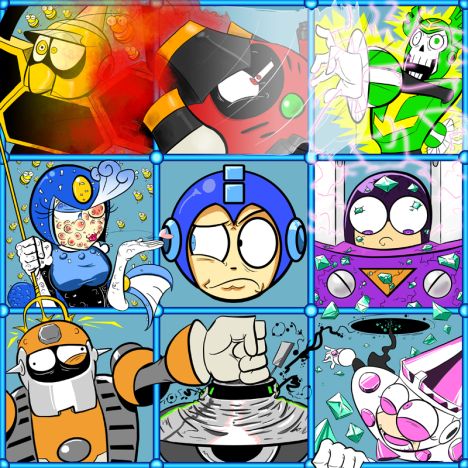 The Art Attack spotlight of awesome falls upon Ben “CyberMoonStudios” Mangum today. Easily the most memorable of Ben’s work is his Mega Man boss weakness series. The bosses from Mega Man 1, 2, 3, 4 and 9 are all shown in the way players would see them in the Mega Man games but as they’re being destroyed by their weaknesses. It makes for a pretty good how to guide for the games.

Another series from Ben is his Minion Meetings. Various minions from different series meet up to assumingly discuss ways to defeat heroes. And in the case of the Octorock and Metroid, they’ve meet up for some loving.

CyberMoonStudios also specializes in flash, animations and comics. Over on his official Web site, you can browse through his Web comic covering various things such as news topic (COSPLAY WOLVES!?!). Over on his deviantART, Ben has some Flash animations that are just loops, but pretty cool nonetheless. To top it all off, Ben has some animations over on his Youtube including the popular Phoenix Wrong “A Boot to the Head” animation that he made.

Check out Ben’s official site and dA for more of his work. Ben is taking commissions for anyone that would like some custom work from Ben. What do you all think of this week’s AAF artist?