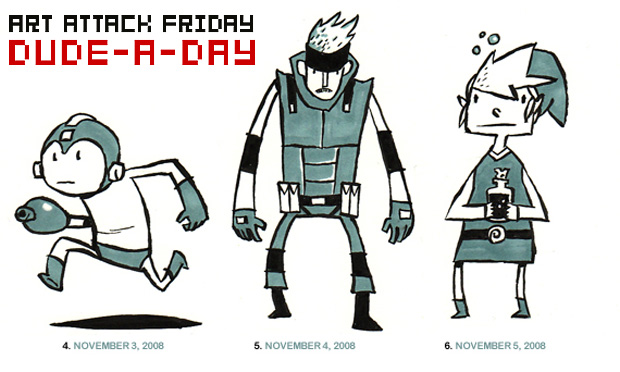 [Art Attack Friday is your weekly look at videogame fan art created by a talented artist.]

Back in February (which, if you’ll recall, was the internet Stone Age), Hamza featured Andy Helms’ Dude-A-Day project on this very column. Dude-A-Day is exactly what is sounds like: Andy wants to draw 365 Dudes in his distinctive art style. He should’ve wrapped up the whole project a month ago, so I figured it was time to check in with him. Unfortunately, he’s a bit behind schedule: his most recent piece, characters from Fatal Fury and King of Fighters, are labeled as June 12 through 17.

“I generally only get to draw in my free time, sadly,” writes Helms, adding that he’s not sure when he’s going to be finished. Seeing as how I had my heart set on on a dudely installment of Art Attack (and already had the header image made), I suppose it won’t hurt to check out his newer stuff.

I’ve gone through Dude-A-Day’s archives and pulled out the game-inspired Dudes, but there are examples of all levels of nerd-dom. It’s times like these that I wish that Destructoid wasn’t just a videogame blog. If you like Dudes, sci-fi movies, cultural ephemera, and quirky art with a three-color palette, it’d behoove you to give it a look. While Helms’ Dudes are little more than sketches, I think he manages to capture something essential about each of his characters.

Anyway, if you dig on Helms’ silly sense of humor and distinctive style, be sure to check out some of his other work—Fearless Griggs, Buttlord, and OMFE—on his site, Atomic Toy.