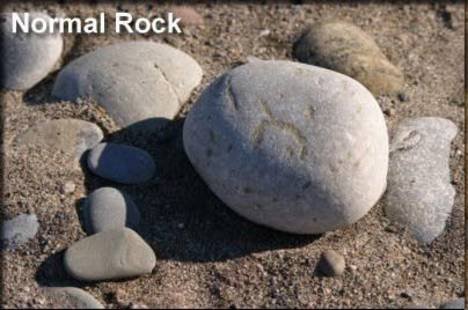 This is a picture of some rocks. There’s nothing amazing or awesome about these rocks. They’re just normal rocks. So what the hell is this doing on Art Attack Friday?

Well to one individual over at the newly started Web site called Foodomain, these rocks are simply more than just normal rocks. Foodomain saw these rocks and wanted to see how they would look like as different videogame art styles. From The Legend of Zelda: Wind Waker, Vice City, Mega Man, Silent Hill, Half-Life 2, Zork I and to many more, Foodomain rendered these rocks as they would appear in various videogames.

There are a ton of different videogame art styles out there so seeing the various art styles applied to one particular object is very interesting. I’m pretty surprised we don’t see something like this more often. From the simple graphics of Battlezone, to the very dark Doom 3, everything is covered. Probably my favorite out of all of these is the Zork I render as all you see is a black screen with the words “You see a rock”.

I’ve included a few of my favorites from this collection in the gallery but to see all of them, just head on over to Foodmain. What do you think of this week’s unique Art Attack artist?