Oddbird Studio is a small, student-led indie developer based out of Toronto. Their first game, Arrow Heads, is already available on Steam, currently eyeing a PS4 and Xbox One release in the near future.

While the playable build of the game at EGLX is based off of the PC architecture, the game’s technical designer, Josh Cappelli, provided assurance that the console build will be a direct port of the original game. As the whole affair is designed with a controller in mind anyway, building a picture-perfect port should provide little challenge to the team, who are excited to have a console build on the horizon.

For those not in the know, Arrow Heads is an isometric arena shooter for up to four players. Each player is a bird with a bow and arrow intent on shooting the other brightly colored birds in the arena. Different arrow types drop in set locations as power-ups, and each level has its own environmental hazards to deal with as the deathmatch ensues. Also included is an arcade mode, where players team up against waves of extremely cute bears who really, really hate the players. It’s all cute and violent, and has a really cool vibe as a result.

What really catches my attention is the control scheme. The game controls comparably to classic twin-stick where the left stick controls movement and the right stick shoots, but in order to fire an arrow the player has to release the stick, simulating the drawing and pulling of a bow. It takes a bit of time to get used to the controls at first, you point in the direction in which you want to fire and release (so kind of the opposite of an actual bow where you’d pull backward), but once it clicks it’s an enjoyable romp.

Currently only the Arena mode (PvP) is eligible for online play across both PC and the inevitable console releases, but the team is open to working on online components for the PvE Arcade mode if the community clamors for it. I guess it’s time to start clamoring!

In addition to the playable PC build, the team also had on display a really colorful and attention-grabbing arcade cabinet of the game. While it’s currently just a working prototype, Oddbird hopes to one day be able to work the build into a full-fledged release that will be playable at your local arcade (if you’re lucky enough to have one nearby). 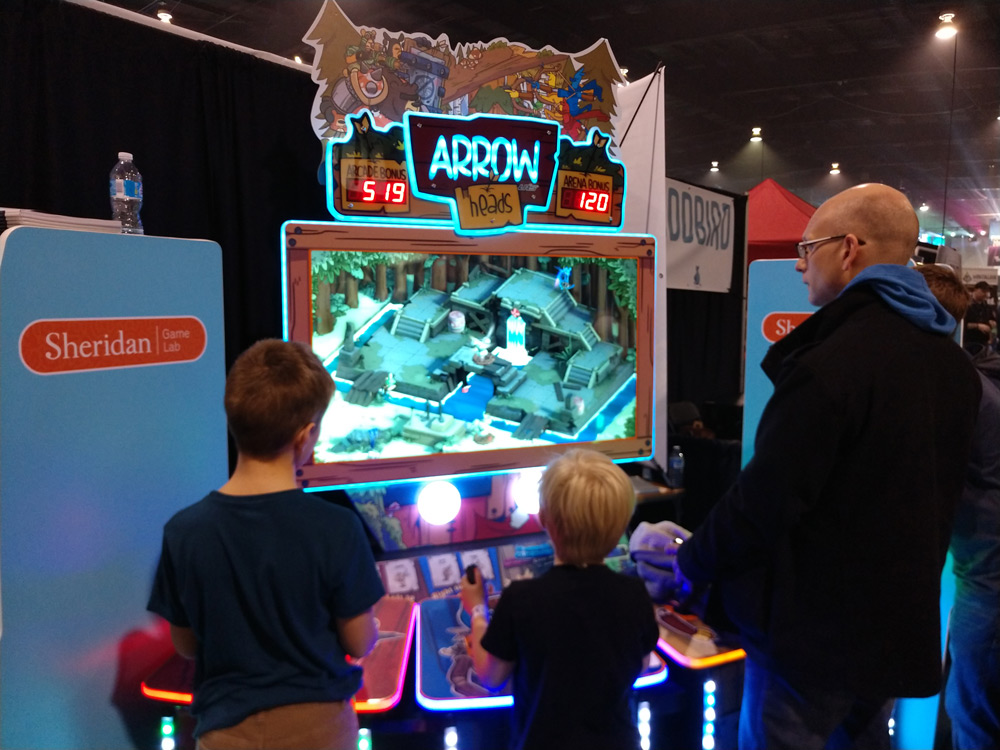 The setup does its best to emulate a typical controller in that there are two joysticks, with the left controlling movement and the right aiming your shot – the difference here being there’s a button on the right stick to fire your shot, as opposed to letting it flick back into place. Two buttons on the left stick handle the jump and dash functions, usually mapped to the shoulder buttons on a pad, giving you more or less the same controls as the PC build.

There’s both really good and really bad elements to this setup. The really good part is it’s an absolute blast to play once you’ve got a handle on it. I spent about twenty minutes at the sticks firing at other players and cute bear enemies before I realized that I had other stuff to do. The caveat to this is that it takes about that long to truly get comfortable and competent with the controls. This was great for me, since play was unlocked and I had the time to learn it, but could be a problem for someone in an arcade setting as several dollars’ worth of quarters can go into it before you even have a grasp on the controls.

That said, it’s super addictive once you get it down and would be a perfect addition to any arcade setup. If the arcade port doesn’t work out, it’s at least something the studio would like to consider in the future, in an effort to bring unique and exciting new experiences to the current arcade market.

Oddbird Studio is hoping to launch Arrow Heads on PS4 and Xbox One sometime this summer.