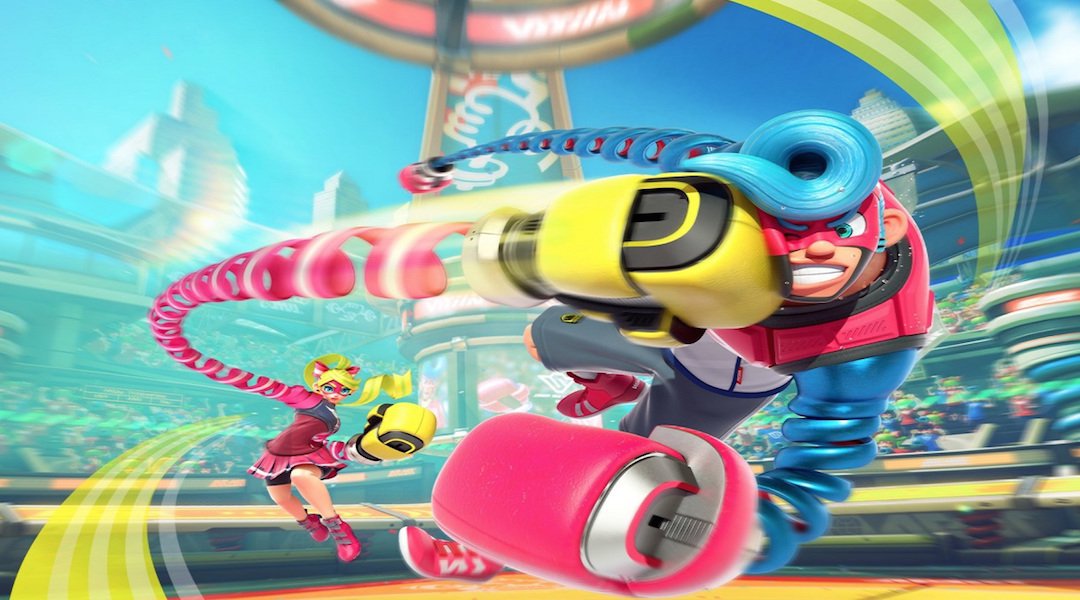 The sequel to ‘Legs?’

There are times when I feel like I’m not playing a game to its max potential, that there is some high skill ceiling I’m not quite reaching. That often comes when playing fighting games, but not just fighting games. Games like Crysis and Vanquish just ooze this mysterious feeling that you can do cool shit in them. That feeling did not come to me in Arms. Conversely, I felt like I had run the course of what is possible.

That is not to say I can’t get better, but the game is relatively simple compared to even the most casual-friendly fighters. When the advertised way to play is holding the Joy-Con facing inward (playing on a Grip or Pro Controller is also possible), using only motion and the four shoulder buttons, it has to be. 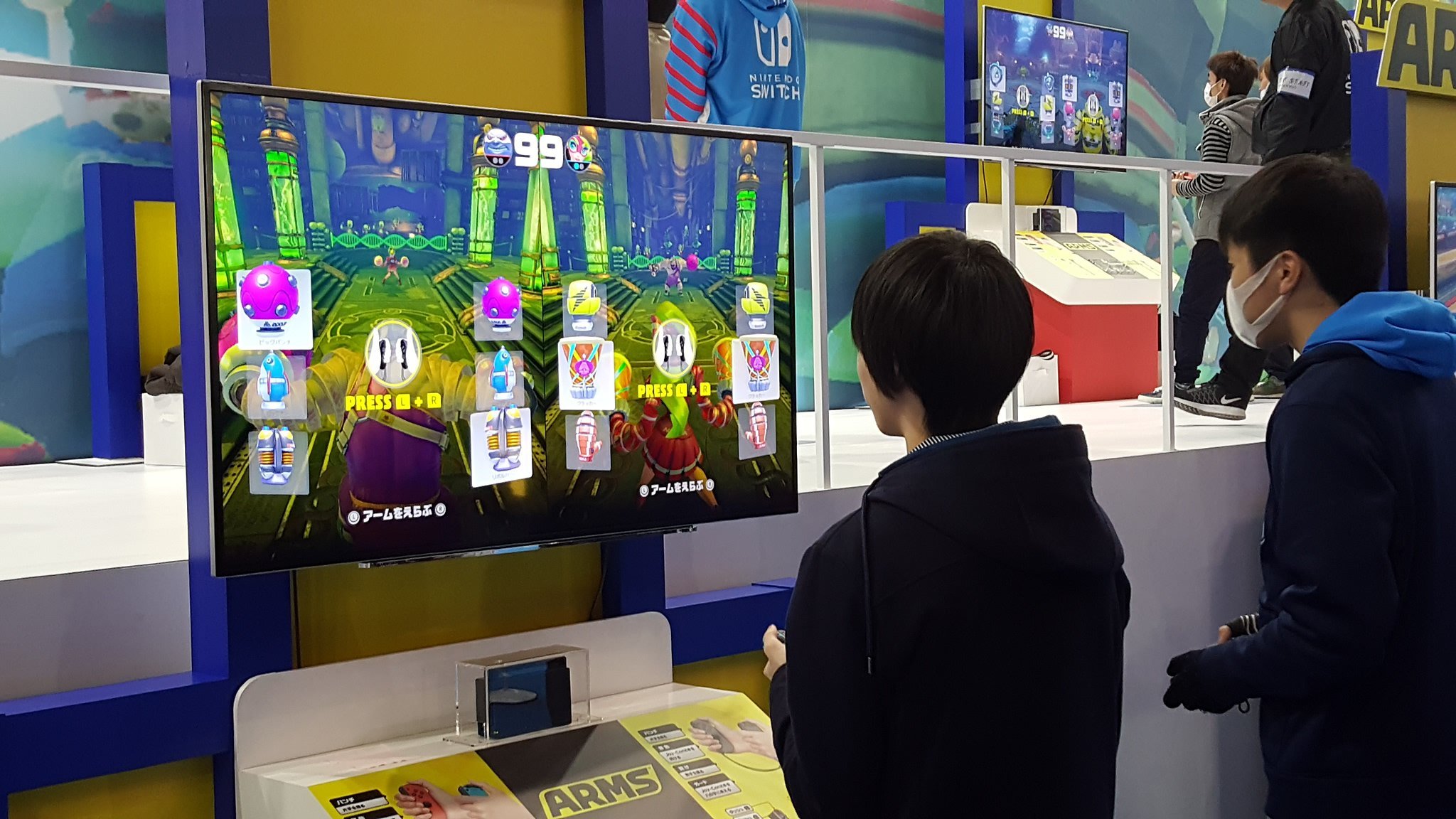 After two players select one of the quirky characters, they then choose one of three available arm weapons for each arm. The same options are available on each arm, allowing you to equip any of the three on either arm or double up if you so choose. Each character has their own unique set of three arm weapons that operate in a variety of ways including curving around obstacles and shooting projectile fists. You can change your load-out at the start of each round in a best-of-three bout. The depth ends with the weapon selection screen, however.

In battle you move by tilting both Joy-Con left, right, forward, or back. Blocks are performed by tilting both of the Joy-Con inward towards each other, and you can ‘fire’ each arm by making a punching motion with the respective Joy-Con. Combining specific motions with the shoulder buttons allows you to jump, dodge, and also grab the enemy which immediately closes the distance and unleashes an attack. When your meter fills up, you can activate a special attack that pummels your opponent with a barrage of punches.

You’ll mostly be fighting a fair distance away from your opponent (they didn’t give them extendable arms for nothing). This makes the fight all about timing your punches and dodges. You can fire both arms out simultaneously if you like, but it will leave you vulnerable to attack while waiting for them to retract in case you miss. It may be safer to hold one arm back. You can’t block with only one arm, but you can fire it to hit and deflect an incoming attack. 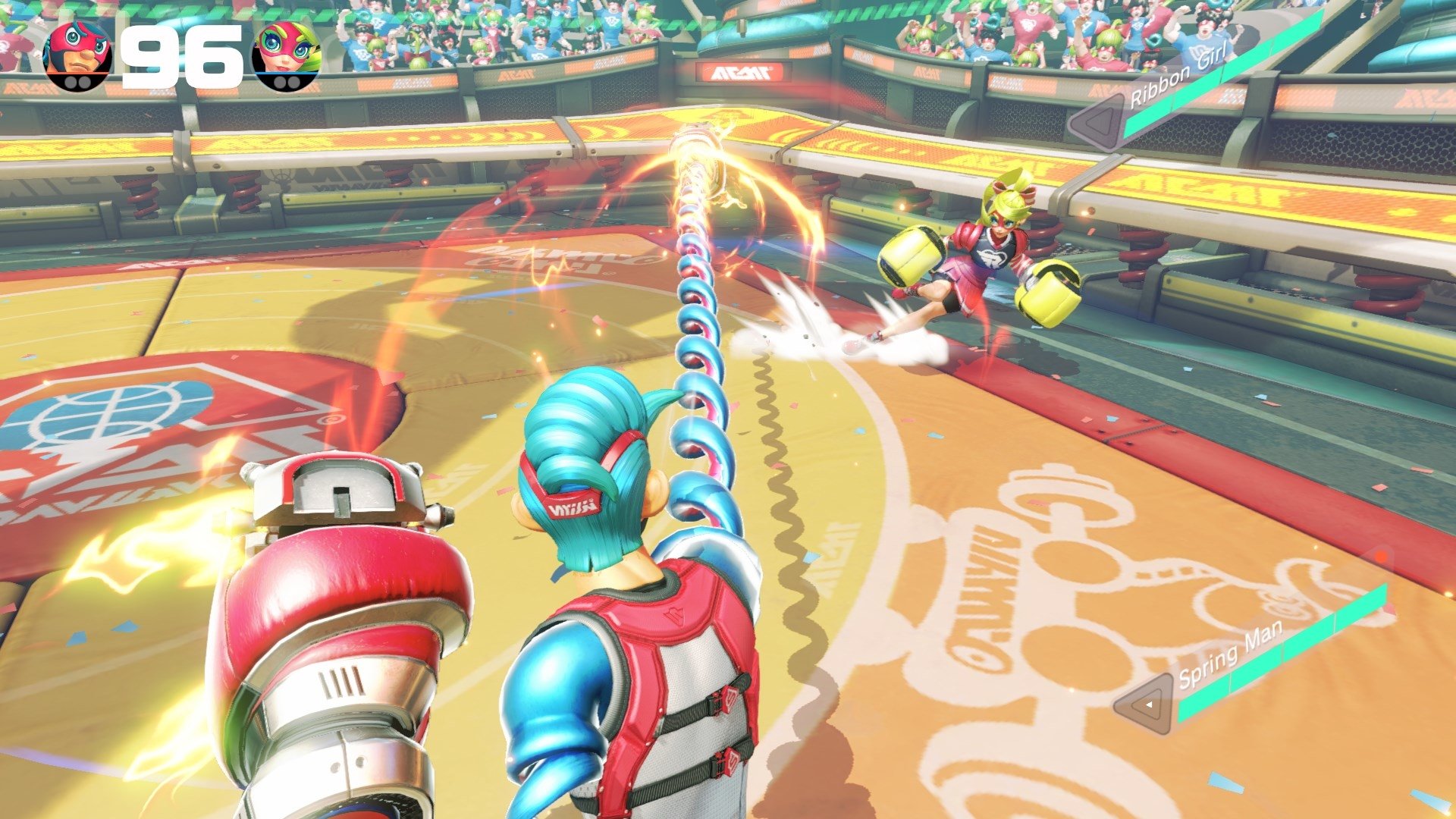 I have described it to sound more involved than it plays, however. Due to the nature of extendable arms, there are no real combos. You and your opponent shuffle back and forth trying to land punches and grabs until someone gets the special attack meter filled. For a fairly simple game, the rounds seem to go on a little bit too long, especially considering the slower rate of play than, say, Marvel vs. Capcom. We played on several different levels, but they all felt the same for the most part with the effect on gameplay coming from breakable column-shaped objects that I tried to fire my arms around.

If I’m cynical I’d say they designed this game with extendable arms to fight from a distance because they have doubts about the ability of the Joy-Con to track a lot of motion input in a short time. If asked, Nintendo would likely respond “We want to slow the pace of play so people don’t tire out or injure themselves when they get competitive.” This game’s existence begs the question: without this focus on fighting from a distance, could it have become a new entry in the Punch-Out!! series? Whatever the game is, I think I prefer closer and more direct punching when boxing, regardless of the controller.

In my short time with Arms I had fun, though it feels potentially light. There hasn’t been a ton of details about the amount of content in this game, but I’m hoping there’s at least a Punch Out!!-style single-player mode. The game ran very smoothly at what I can only guess was 60fps, and most of all, it’s just gorgeous to look at. Nintendo is the best at making simple, colorful art in high definition and it really shows here. Spring Man’s hair causes my brain to smell bubblegum if that’s any indication.