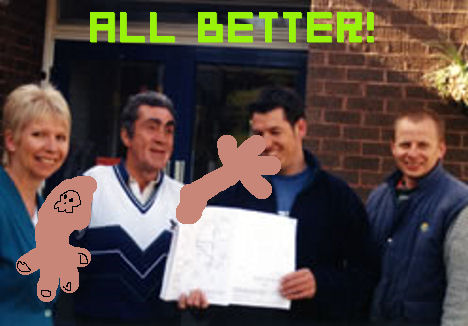 A 64-year old UK Mayor is to be motion captured for an upcoming videogame, as reported by the filthy British tabloids. Frank Letch, a Crediton Mayor who has learned to use his feet to perform such tasks as driving, potato peeling and writing, is a notable mo-cap subject since he was born without any arms. I’d hate to run for Mayor in Crediton — you can’t beat that, no matter what you do, unless you yourself are missing your entire spinal column. And feet.

[Letch] will be kitted out with special leggings fitted with electronic tags before being filmed carrying out various tasks with his feet.

The footage will then be mapped onto a computer and Frank …  will be transformed into a cartoon … He was approached by Fragment Media, based in Newcastle, after its director Simon McKeown spotted him at a disability exhibition.

We don’t know what the videogame is at this current time, but suffice to say that it won’t be a Ristar sequel.

What? Oh shut up, don’t act like you weren’t thinking of it.