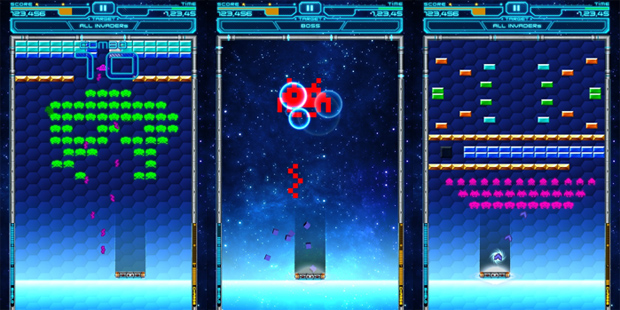 I was too young to get into Space Invaders, influential as it was, but Arkanoid is my jam. Taito is working on a mobile game for iOS and Android that combines the two properties, according to Game Watch, and I’m loving the sound of it (minus the regrettable “mobile” part). The company held a press conference for the announcement and this happened. Also, this and this.

In Arkanoid vs. Space Invaders, you’ll use the paddle-esque Vaus to absorb incoming attacks until your meter is full and you can then fire that energy back in ball form to wipe out the invaders.

The title will debut in Japan this winter. I hope it’ll release worldwide and, if I’m really pushing my luck, also come to platforms besides iOS and Android. 3DS or PS Vita would be just lovely.