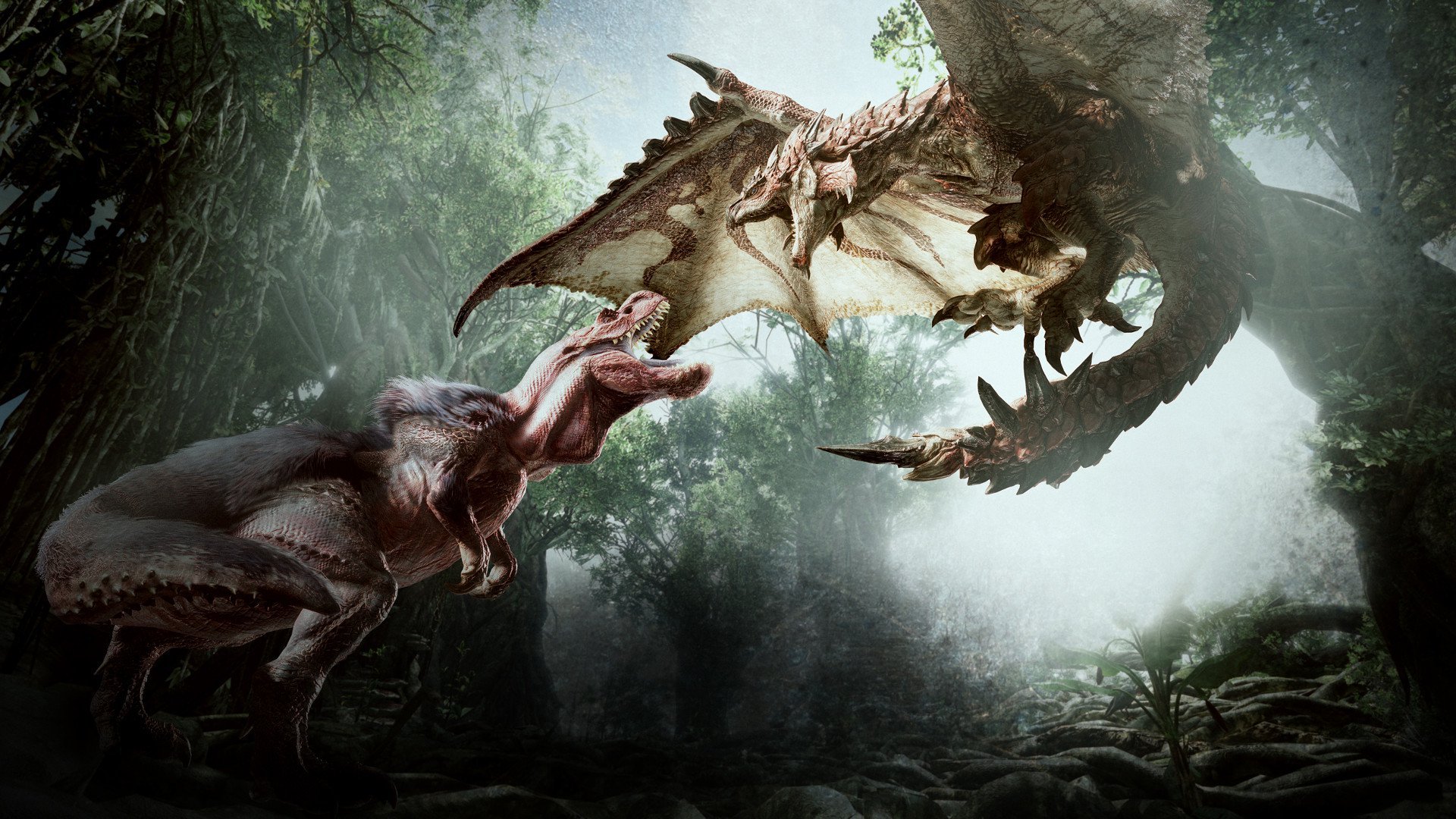 Another E3 has come and gone, and now we play the waiting game. In the meantime, let’s discuss one of the big reveals from the show: Monster Hunter: World.

Capcom’s landmark hunting-gathering series has long been a phenomenon in its native land, but that success hasn’t been replicated elsewhere. Capcom believes that a big chunk of the blame rests on the Western handheld market, which is nowhere near as robust as Japan’s. With World, bound for PlayStation 4, Xbox One, and Windows, the company hopes to change that.

I personally am not a huge fan of the franchise. I gave it a fair shot with Tri on Wii, yet it never “clicked” even after dozens of hours of solo and party play. That said, I do understand how Monster Hunter could amass such a die-hard following, in much the same way as I understand that its complex controls and time-investment demands have turned away many others. To find success, World will need to be more inviting to newcomers while retaining the series’ familiar essence.

But even if World checks all the right boxes, I doubt that it’ll grow the Western audience in a significant way. And what of Japan, where Monster Hunter reached its lofty heights through the strength of local multiplayer on handhelds? Is Capcom willing to risk guaranteed sales in one market to chase another that may not exist? 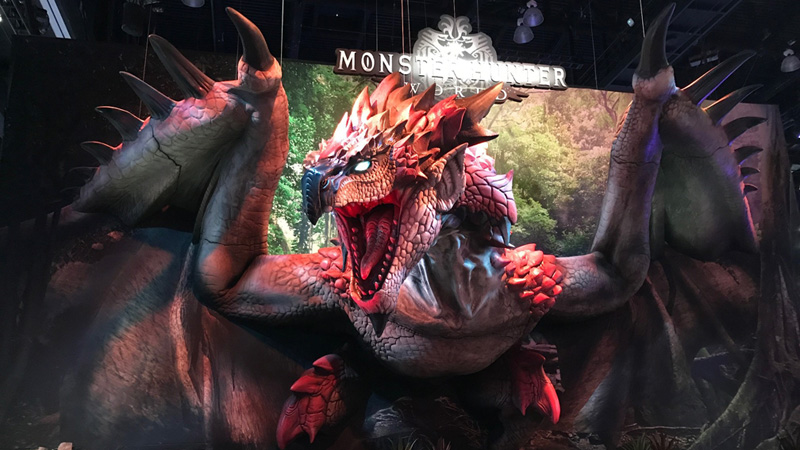 Capcom has made a fair number of questionable decisions these past few years, from Street Fighter V‘s content delivery to Mega Man‘s… well… just Mega Man, period. The latest stumble concerns the HD Switch port of Monster Hunter XX, which Capcom announced would be landing on Nintendo’s new hardware in Japan a mere five months after its 3DS debut. The Switch’s value proposition as both a home and portable device seems like the ideal solution to Capcom’s Western expansion woes. The announcement also greatly benefitted Nintendo when it shot the company’s stock to the highest it’s been in eight years.

Then E3 rolls along, and with it word that the next mainline Monster Hunter is bound for seemingly every platform save the Switch. World‘s development would have started years ago, long before the Switch was even a whisper, so it makes sense why a Switch version wouldn’t be in the cards. What doesn’t make sense, though, is Capcom’s refusal to localize XX “at this time.” Are they focused entirely on ensuring World‘s debut is a success? Do they simply not care? Whatever the reason, the poor messaging has caused some fans to worry that Capcom may be turning its back on handheld Monster Hunter in the West.

But I digress. Let’s return to World and speculate what kind of success Capcom expects out of it. We can assume that it would have to be the best-selling Monster Hunter in the West by a decent margin; we can likewise assume that its global sales would have to at least be within range of the last few installments’. That’s a fair assessment, right? Right.

Time for some numbers. 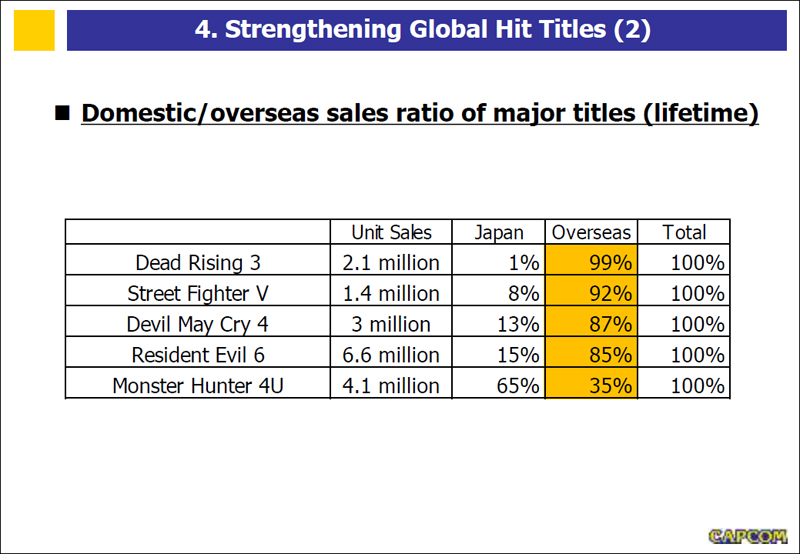 The above domestic / overseas sales ratio chart comes from the Chairman’s Statementdelivered during Capcom’s 2nd Quarter in FY2016 Presentation of Financial Results. As you can see, all of the company’s tentpole franchises sell best in international markets with the exception of Monster Hunter. You may also notice that Monster Hunter 4 Ultimate is the second best-selling title on the list, suggesting that a more balanced East / West split could grow the brand even further.

Incidentally, 4U was the first title in the series to ship one million units across North America and Europe. It is also the best-selling overseas title in the series, sitting just under 1.5 million, according to the 35% ratio from the table. 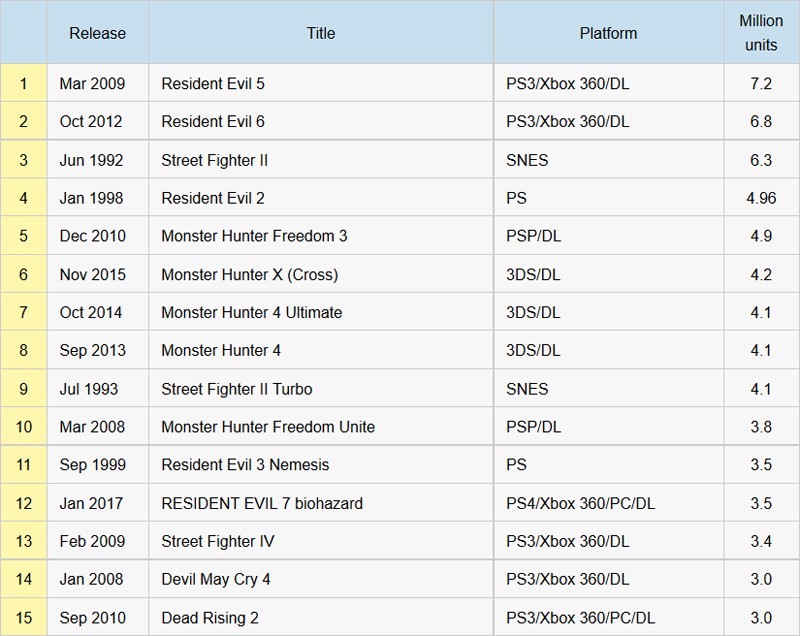 Here’s a slice of Capcom’s list of million-sellers, accurate as of March 31, 2017. Let’s toss out the older titles and focus on games released during the so-called “Eighth Generation,” which kicked off with the launch of the 3DS in 2011. We are left with the following:

Since the start of the generation, only five Capcom games broke the three-million barrier: two Resident Evils and three Monster Hunters. To be fair, Monster Hunter Freedom 3 (or ratherMonster Hunter Portable 3rd, as the Japan-exclusive title is properly known) was released in December 2010, so the bulk of its 4.9 million sales were earned during the following year. And if I’m mentioning that, I might as well also mention Dead Rising 2, which dropped in September 2010 and just barely crossed three million.

According to this data, Monster Hunter is currently Capcom’s second best-selling franchise, a feat made even more impressive by the fact that its games are typically exclusive to a single platform and are sold either predominantly or entirely in Japan.

The last major Monster Hunter to debut on home consoles was Monster Hunter Tri for Wii in 2009. At this point, the Wii was still a hot item, and the Monster Hunter franchise had exploded thanks to the PSP. But even with all that momentum, Tri stalled out the gate. Why? No four-player local co-op (and no, that neutered split-screen mode wasn’t cutting the mustard). The game eventually hit 1.9 million globally, but by then Capcom had accepted that handhelds were the future. This sentiment was firmly cemented after Monster Hunter 3 Ultimate for 3DS coasted to 2.6 million without online capabilities, while the technically superior Wii U version never even breached a million.

Now Capcom is giving the home space another shot with Monster Hunter: World, and again local play is off the table. How will Japanese players react when it launches exclusively on PS4 next year? Keep in mind that Japan is the PS4’s weakest territory. The only title to cross a million in the region has been Final Fantasy XV, and it basically limped over that threshold — a strange twist of fate for the once all-powerful Final Fantasy brand. I’m sure Dragon Quest XI will join the PS4 million club when it arrives next month, but the jury’s still out on what kind of split it will share with the 3DS version.

Tri moved at least 690,000 units in the West, so we can pin the Japan figure at about 1.2 million. Can World match that? Let’s say that it can. In fact, let’s be even more generous and claim that it will hit two million! It’s a long shot, but stranger things have happened! 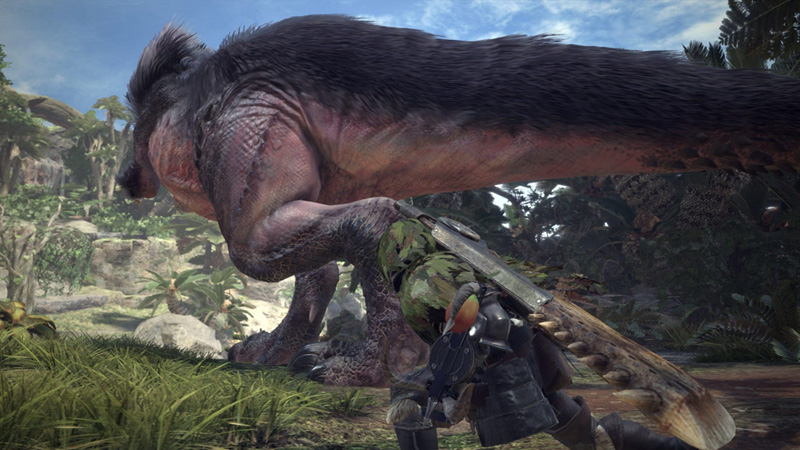 With Japan on lock, we turn our gaze to North America, Europe, and the various smaller territories. If World is to effectively grow the brand while meeting an absolute level of sales on par with the most recent games, it will need to sell between four and five million overall, preferably toward the higher end so that it can match Portable 3rd‘s 4.9 million figure. In other words, World needs to sell about three million in the West.

Does that seem feasible across PS4, Xbox One, and PC? Eh, I wouldn’t bet on it.

I wasn’t drawing some arbitrary line when I limited the list of best-sellers from before to those that broke three million. I was merely illustrating how difficult it is for even the biggest, most Western-friendly Capcom titles to reach that target. Look at vanilla Street Fighter IV‘s 3.4 million total — the lastest Japanese figure I could track down was a combined 210,000+ across PS3 and Xbox by the end of 2009. Factoring a few additional sales in subsequent years, that would peg it at around 3.1 million for the rest of the world.

Now tell me, does it seem feasible for World to sell roughly as much as a game that was considered a global smash that reignited interest in the 2D fighting genre among the mainstream? Probably not.

To recap, we are counting on Monster Hunter: World to sell two million units domestically, surpassing the last major home console installment by around 800,000 and on a platform that barely managed a single million-seller after three years, as well as three million units abroad, doubling the performance of the current top-selling overseas installment and matching the performance of other major Capcom franchises that have never struggled to find an audience in international markets. If World can accomplish that, it will have sold in the same ballpark as a previous game in the series that was restricted to a single country on a single platform.

And that’s the best case scenario! 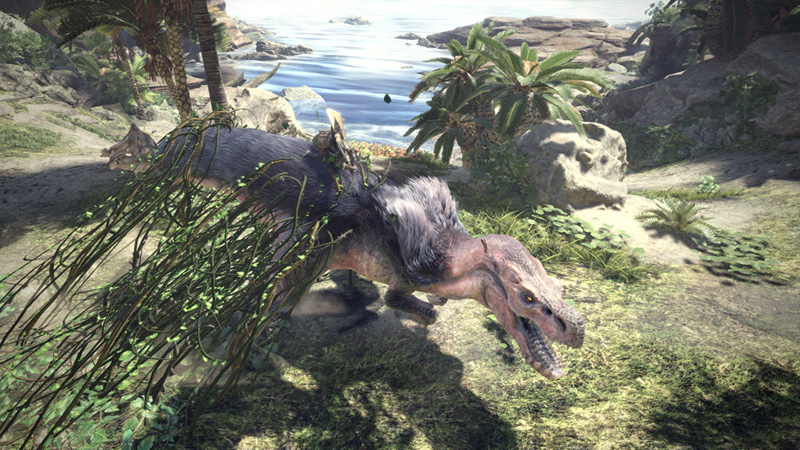 World is not going to hit two million in Japan — I doubt that it can even match Tri‘s numbers. I am confident that it will outsell 4U overseas, though not by much. But such an outcome is possible thanks chiefly to the series’ slow but gradual expansion over the past few years rather than to a platform shift or any proposed mechanical tweaks. And I can’t imagine that Capcom will be happy with merely “decent” sales, considering how much they’ve invested in this ground-up HD Monster Hunter for three separate platforms rather than one.

Monster Hunter has been around for 13 years; most of its mainline chapters for both home and portable machines have been localized. We’ve had plenty of opportunities to test the waters and recommend others to do the same. Expecting World to suddenly launch the series into global stardom at this point is akin to expecting a localized Dragon Quest XI to do what 30 years of Western expansion efforts in that franchise have failed to achieve.

The hard truth is that is that Monster Hunter is simply not appealing to Western gamers at large. We should be grateful that it has at least managed to become a modest success abroad, with a hungry horde of hardcore fans ready and willing to follow the series wherever it may go. I’m not saying you shouldn’t be excited for World; just don’t act surprised if Capcom decides not to pursue this new direction any further. The most we can hope for is that Capcom will be satisfied by World‘s performance just enough that future installments will continue to be cross-platform, only with portable builds as the base versions.

But those are just my predictions. How do you think Monster Hunter: World will fare? Let me know in the comments!