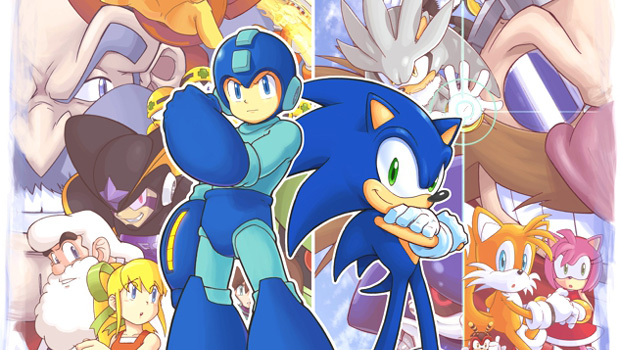 I’m still reeling from this morning’s Mega Man shenanigans. I can at least take comfort in knowing that some companies still give a damn about the little blue dude. Like Archie Comics, for example…

As you are already aware by now, Archie is making my childhood fantasies come true with a 12-issue crossover event starring Sonic the Hedgehog and Mega Man. Penning the whole affair is our pal Ian Flynn, head writer for Mega Man, Sonic the Hedgehog, and Sonic Universe. Recently, several outlets have been chit-chatting with ol’ Ian regarding this epic project, so I’d like to cherry-pick a few choice details.

According to The Mega Man Network, this crossover was actually conceived by Capcom and Sega, who then basically gave Archie carte blanche. Though the “When Worlds Collide” arc is to be a self-contained tale, it’ll have some impact on the overarching canon, particularly on the main Sonic series. The idea is to celebrate the most memorable characters from the games, so comic-exclusive characters will most likely be sitting this one out. And since the sky’s the limit, even characters who have yet to appear in the main series (notably Bass) will get a chance to party. No X characters, though — Classic only. Final Destination.

Over on Newsarama, we learn that Sonic and Mega Man don’t get along right away. They hold different attitudes and values, plus there’s that whole issue of Mega’s being a robot and Sonic’s being a seasoned robot-smasher. On the flip side, Wily and Eggman are immediately BFFs, sharing common goals, interests, b*tchin’ mustaches, and even nemeses with blue color schemes!