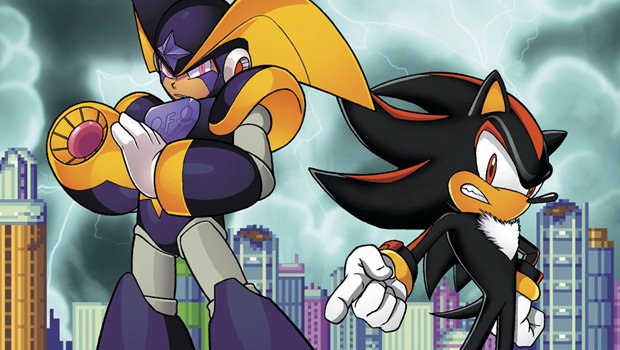 Celebrate Mega Man’s past, present, and future starting with issue #20

Issue #20, a one-shot entitled “Rock of Ages,” skips past the upcoming Mega Man 3 adaption to bring us an adventure in-progress. Dr. Wily has taken over the Chronos Institute and remodeled it to resemble Wily Tower from the Genesis game The Wily Wars. Using the Institute’s time travel technology, Wily inadvertently traps Mega in a temporal anomaly, causing the Blue Bomber to spontaneously jump into the future at random intervals.

This journey gives us a peek at comic tales yet to be told. Many faces from the games, both familiar and obscure, make brief cameos, such as the Mega Man Killers, the Stardroid leader Terra, and the Robot Tournament participants from Mega Man 6, and of course Bass, who features prominently in this issue.

I wanted to learn more about this version of Bass, the upcoming Sonic / Mega Man crossover, and the general path the comic will take from here on out, so I once again got in touch with series writer Ian Flynn for another brain-picking session.

Though he’s one of the more popular characters in the series, Bass is not slated to officially appear until the Mega Man 7 adaptation, which could be who knows how many years out. Yet he’s gracing us with his presence in this issue as well as the “When Worlds Collide” arc. According to Ian, being able to capitalize on such a fan favorite so early was quite the blessing.

“We’ve got to handle the Mega Man 3 adaptation and Ra Moon business after the big Sonic / Mega Man crossover,” Ian said. “I’ve got a road map to get us to Mega Man 10, but I don’t have every fine detail nailed down yet. When we started out, I wasn’t sure if we’d get a chance to trot Bass out early, and here we’re getting him twice over. You never know what the future will hold.”

We previously saw Bass in comic form during Hitoshi Ariga’s Mega Man Megmix / Gigamix series, but a new comic means a potentially different interpretation of the character. On top of that, Bass will be paired up with Shadow during the crossover event, which opens up a clear avenue for direct comparison. Exactly how do the two anti-heroes differ?

“Aside from them both being a visual ‘dark analog’ to the main hero, they’re really not all that similar. Shadow is dark and brooding, an ‘ends justify the means’ kind of guy, but he’s ultimately heroic. Bass is a villain through and through. Any good that comes from his angry rampages is purely accidental. Character-wise, he’s closer to Metal Sonic or Omega.”

From a certain perspective, the anniversary issue serves as a turning point for the series, a milestone after which the the comic will grow in a more focused direction. “This whole series has been something of a learning experience, and so there might be a rough edge here or there,” Ian mused, addressing elements from earlier issues he feels could have used more work. “But overall I think we’ve had a tremendous amount of success with adapting the Classic series to a comic book format, and the reader response has been overwhelmingly positive.”

Additionally, the comic had been sticking with a four-issues-per-arc format, up until the last few months which feature shorter stories. I’m not the only person who has been slightly concerned about pacing and whether future games could adequately be covered under such restrictions. Ian and the rest of the staff are still hammering out these story-telling details, but the fruits of their discussion won’t manifest until after “When Worlds Collide.”

Of course, the team is always trying to please the fans, whether with regards to the comic structure or with references to other Mega Man sub-series like X or Zero or even to song lyrics from The Megas or brentalfloss. “We’re always open to reader input, so folks should write in and let us know what they’d like to see.” Sounds like a healthy position to take!

Archie is showing no signs of slowing down the Mega Man machine; by the sound of it, things are only going to pick up more. With Bass on the scene and the Sonic universe team-up on the horizon, Archie has this 25th anniversary business locked down tight.

Check out the scans of Mega Man #20 below along with the exclusive reveal of the “Rivals Variant” cover of Sonic the Hedgehog #248.