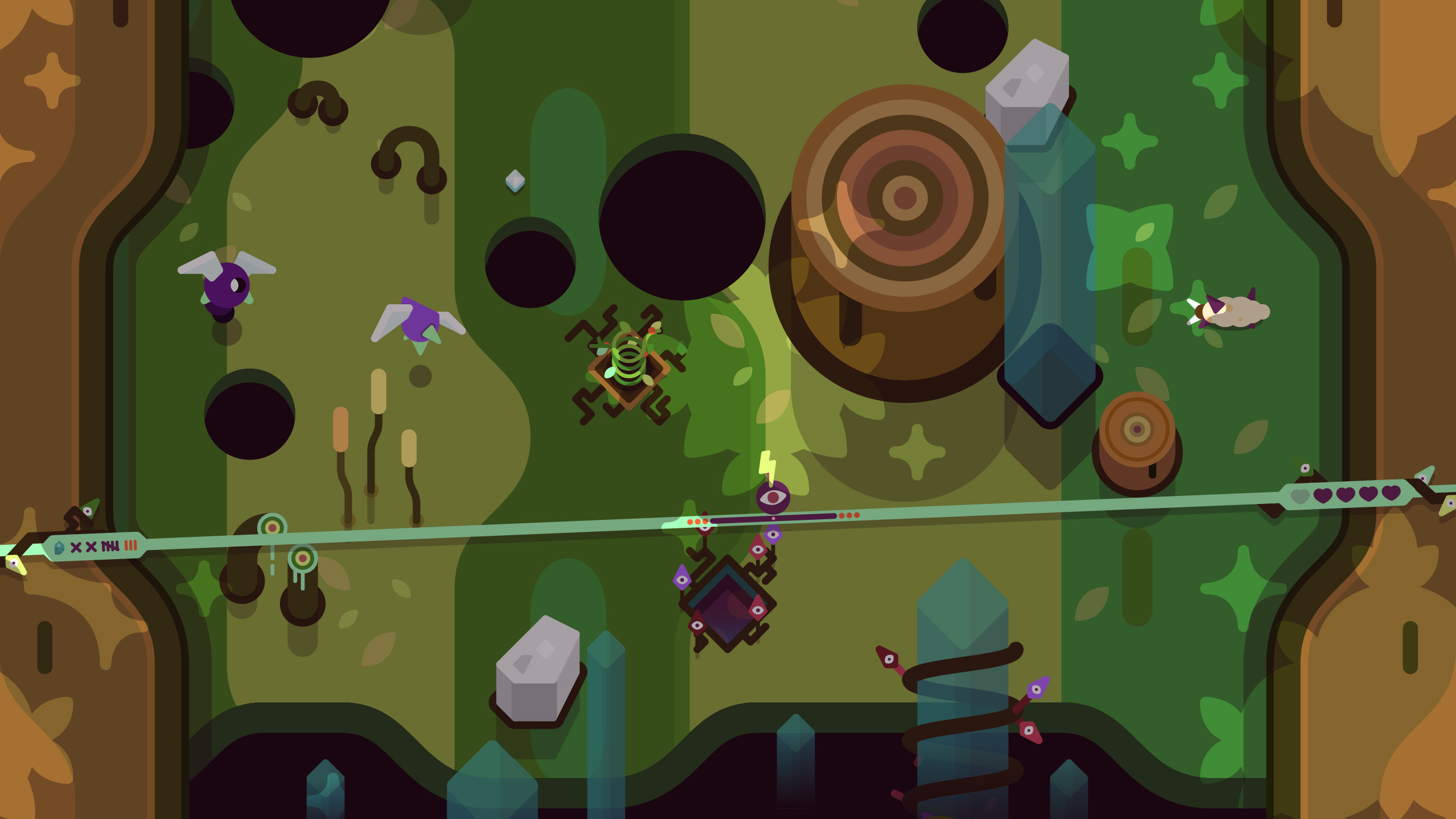 TumbleSeed is an audio-visual treat. I knew that much before giving it a spin.

What I didn’t expect was how much strategy comes into play in this arcade-inspired permadeath romp about a fragile seed on a journey up a mountain. Fast reflexes can get you pretty far on your climb, but after many failed attempts, I’ve learned that having a plan of attack is equally important.

It’s right there in this gif. In TumbleSeed, you indirectly control a seed by tilting both ends of the bar it sits on either up or down to make the little guy roll. It’s a straightforward mechanic, but it has a unique feel in the context of the far-reaching roguelike/roguelite genre, and mastering it is no easy task.

The holes, on their own, usually aren’t so tricky (well, at first!). With enough time, you could move upward at a crawl to safely bypass them. But time isn’t on your side when there are monsters buzzing around, or firing off beams of energy, forcing you into a panicked hustle. They’ve got their individual behaviors to learn, and it’s not long at all before you can commit those patterns to memory.

The hidden depth of TumbleSeed lies in its upgrades or, for lack of a better term, suits. According to one of the creators, Greg Wohlwend, the team was directly influenced by the 1980s Taito arcade game Ice Cold Beer, Spelunky, and Mega Man. It’s the latter inspiration that has led to these suits.

At any time, you can pause the action to swap between your various suits. With none of them equipped, when you touch one of the tiles (those eye-lookin’ things) spread throughout the level, you’ll create a checkpoint. That’s assuming you have the currency (also found throughout each level) to spare.

But if you were wearing, say, the armored suit, instead of creating a checkpoint, you’d gain a spike on your body, perfect for dispatching a single foe. The longer you survive, the more suits you’ll be able to gain during that run — and the more tragic your inevitable slip-up will be. Some of the others let you fill holes with rain, or regain health, or go temporarily invincible, but with more power comes steeper prices. It’s here you have to constantly weigh the reward against the painful risk of falling into a hole.

As I’ve said before in prior coverage of TumbleSeed, I’ve never played anything quite like this. It’s an intriguing mix of simple-but-nuanced arcade sensibilities with more modern design choices and, again, it looks and sounds superb. What I have tried so far has me feeling confident about the final version. That’ll be coming to Windows, Mac, and PlayStation 4 before too long, so be sure to keep watch.