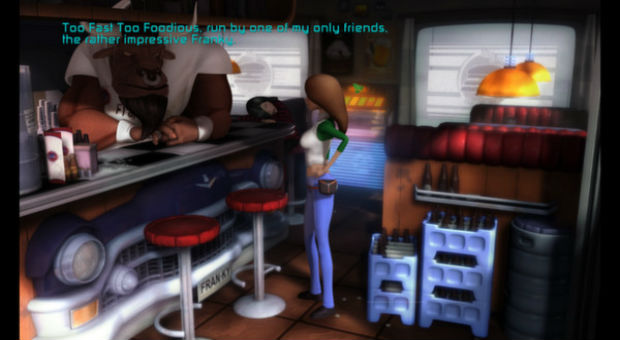 Well, maybe you did, I don’t know

AR-K –Chapter 2: The Girl Who Wasn’t There- is the sequel to point-and-click adventure game AR-K –Chapter 1-. I’m willing to bet you haven’t played it, but the brainchild of Gato Salvaje Studio is now available for pre-sale on Steam, releasing July 21 for those eager to get in on the action. If you preorder now, you can nab the game for $7.99, until its release when it goes up to $9.99.

Gato Salvaje Studio put the series together via their successful Kickstarter campaign, recruiting Ash Sroka (Tali from Mass Effect) and Greg Rucka (comic book writer) for help on their various projects, including Chapters 3 and 4, as well as a remaster of the first chapter.

It’s a classic adventure game, but as I’ve been writing this announcement I can’t help but wonder what kind of writing it’s got when the Steam description is as follows:

“[…] Is the world where Alicia Van Volish lives. She is a former cop turned into a journalism student who wakes up after a one-night stand with a terrible hangover and a lot of questions: How much did she drink? Did she really take that guy home with her? What was his name? And what, exactly, is the Golden Sphere, the mysterious object that seems the source of all Alicia’s woes? And what was that guy’s name again?”

Alrighty then. Sure hope Alicia can get to the bottom of what that guy’s name one. Probably in her best interest to not worry about it, because the sex couldn’t have been that great if she can’t remember the dude’s name, amirite?