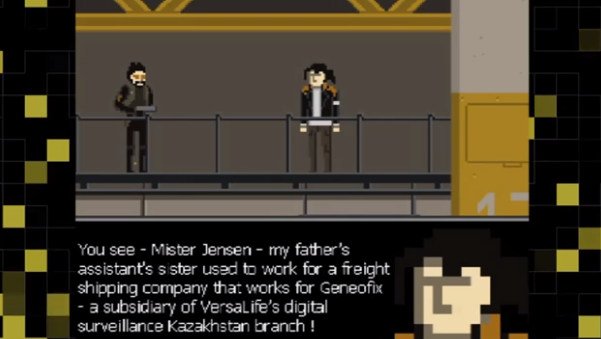 “Haha! We’re making a Wii U port instead of this awesome game!”

Not to be confused with the upcoming Wii U port — which is, in fact, not an April Fools gag (angry comments coming in 3 … 2… 1 …) — Deus Ex will be making the jump to 2D in Human Defiance — well, at least in some alternate reality where April Fools game announcements are legit. This one really rubs me the wrong way, since it actually looks cool and there is some precedent for games that have successfully gone from 3D-to-2D (Dark Void says hi!)

A 2D, co-op focused Deus Ex sounds kind of rad, so it hurts to go on further on this prank that feels just downright mean in teasing us. In case you think this is real, the official Facebook page posted the info with a winking emoticon which one typically receives when one is jesting to another, for example: “I think you got me pregnant ;)” or “You left the stove on and there is now a fire spreading across five city blocks. You are responsible for 10+ people gruesomely burning to death in a fire. Please come home soon! ;)”

For more fake info, head over the official website of this non-official game and then eat a lot of cake and feel like crap because we live in a world where we get a Wii U port instead.