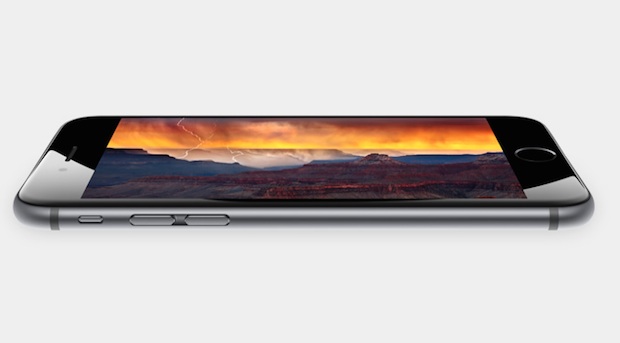 Two sizes: both the iPhone 6 and the iPhone 6 Plus were announced this morning at Apple’s press conference in Cupertino, CA. The iPhone 6 is 4.7 inches, while its big brother is 5.5 inches. That’s 1224 x 740 and Full HD, respectively. They’re both less than 7 mm thick (6.9 mm and 6.71 mm), making them the thinnest iPhones yet.

Retina screen? Forget that — this is the Retina HD. The new screen is sRGB accurate, with a super thin backlight — an IPS crystal display.

A new camera comes in at 8 megapixels and a f/2.2 lens. A new sensor has what apple calls “focus pixels,” essentially giving the phone phase detection, a feature usually reserved for high-end photography equipment. The iPhone 6 Plus gets optical image stabilization.

It runs a new generation A8 chip that gives 25 percent faster CPU performance and 50 percent more energy efficiency than its predecessor. To use that power, developers like Epic, Ubisoft, Gameloft, EA, Square Enix, and Disney have already signed on to make games and apps, with the first to come before year’s end.  Super Evil Megacorp showed off battle arena game Vainglory at the event.