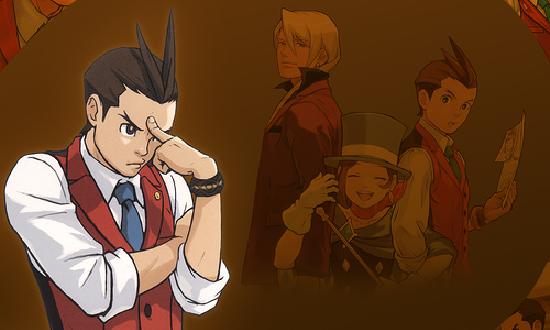 If you are a huge Phoenix Wright fanboy like me, you will be very excited to hear that Capcom has just announced the first game in its spin-off series, Apollo Justice: Ace Attorney, is scheduled for release in on February 12.

I already miss my boy (big ups!), but am willing to be open-minded and give his slick red vest-wearing colleague a chance. While I don’t think I will have as much of a secret man crush on Apollo, what keeps me optimistic is the fact that Apollo Justice was specifically made for the Nintendo DS (as opposed to the Phoenix Wright GBA ports). Hopefully this will mean more fun gameplay reminiscent of the final episode from the first Phoenix Wright game (added elements that allowed the player to rotate evidence, blow on the screen while taking fingerprints, etc.).

Are you excited about giving this new series a try, or are you pouring a 40 for Phoenix and cursing Apollo’s smug look as you read this?

SAN MATEO, Calif. — January 9, 2008 – Capcom® Entertainment, a leading worldwide developer and publisher of video games, today announced that the latest installment of its highly popular courtroom drama series, Apollo Justice™: Ace Attorney™ is scheduled for release in North America on February 12, 2008. The first Ace Attorney game developed specifically for Nintendo DS™, this is the fourth title in the series and will feature all new characters, including new defense attorney Apollo Justice. Apollo Justice: Ace Attorney has been rated T for Teen by the Entertainment Software Ratings Board (ESRB).

This new chapter to the Ace Attorney series will drop players into the shoes of Apollo Justice, where they’ll make use of his uncanny ability to uncover witnesses’ lies by studying their body language. But as talented as our hero is, he wouldn’t get far without the support of his assistant Trucy, a mysterious female magician. Apollo also receives invaluable advice from Kristoph Gavin, his ultra-cool mentor whose perfect logic and natural instincts have won him numerous cases and the respect of his colleagues.

Fans and newcomers alike will get a chance to experience the game early by way of a flash demo that will be found on both www.Capcom-Unity.com and www.Ace-Attorney.com in January. Similarly, Nintendo DS™ owners will have the opportunity to download via wi-fi a demo of the game from Nintendo Stations which can be found in various retail locations. By sampling the unique puzzles, characters and storyline of Apollo Justice, gamers will see for themselves what the hysteria surrounding Ace Attorney series is all about – unrelenting fun!

• 1st fully new title to be developed specifically for the Nintendo DS.

• Microphone can be used to yell “Objection!” and “Hold it!” as you cross examine witnesses

-Investigation phase – survey crime scenes, interview witnesses and gather evidence that will be used in court

-Court phase – present findings from the investigation to support your case, listen to testimonies and examine witnesses

-Apollo Justice: the new defense attorney who leads the series.

-Klavier Gavin: in addition to being a top prosecutor, Klavier is also the lead singer in a highly successful rock band who brings his star qualities into the courtroom.

-Kristoph Gavin: the coolest character on the judicial circuit, and Apollo’s mentor. His cool headed thinking means he always provides his clients with the best defense.

-Trucy : The mysterious magician Trucy started working with Apollo after a chance encounter.