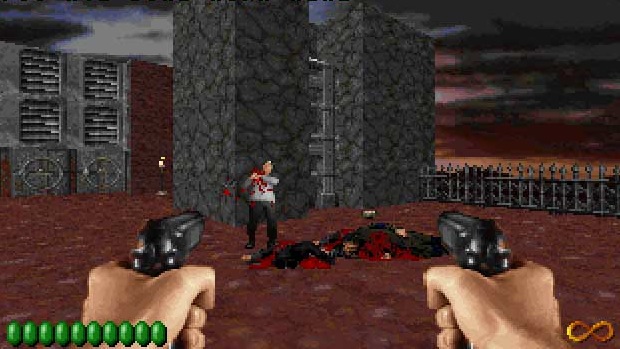 The name Apogee disappeared sometime in the mid-’90s, but not before having a sizeable impact on both PC games and first-person shooters. Between 1993 and 1996, Apogee published a series of over-the-top shooters that definitely influenced my gaming habits and now you can get these games for 50% off at Good Old Games.

Among the games on sale are the two Blake Stone games, Duke Nukem 3D: Atomic Edition, the more recent Duke Nukem: Manhatten Project, and Rise of the Triads: Dark War.

If the name Blake Stone doesn’t mean anything to you, you’re missing out. Apogee published both titles in the series, Blake Stone: Aliens Of Gold and it’s sequel Blake Stone: Planet Strike, in which you played the titular British Intelligence agent as he hunted the nefarious Dr Goldfire. Using the Wolfenstein 3D engine, the Blake Stone games were released after Doom and failed to make a big impact.

But that wasn’t the case of their next game, Duke Nukem 3D. For those wondering what the fuss was about, Duke Nukem 3D was a genuinely innovative game; unique weapons, a talking protagonist, interactive environments, the ability to look up. Sure Duke wasn’t PC, but he was never as crass as the star in Duke Nukem Forever. It’s still worth going back and playing Duke Nukem 3D and the special offer is valid for the 2D action title Duke Nukem: Manhattan Project too.

Finally, Apogee published the absolutely insane Rise Of The Triad: Dark War in 1994, an over-the-top FPS that must’ve had a real bad influence on me when I played it. From the excessive violence and the shower of gibbs to the power ups, which included a Shrooms mode, Dog mode and a proper God mode that instead of just making you invulnerable actually turns you into a 15 foot “god” who can obliterate enemies just by touching them! Oh, and one of the characters is called Ian Paul Freeley. Tee hee hee.

There’s plenty in this special offer that I would recommend. Considering all the games are only $2.99, there’s no reason not to pick up some classic PC shooter history this weekend.