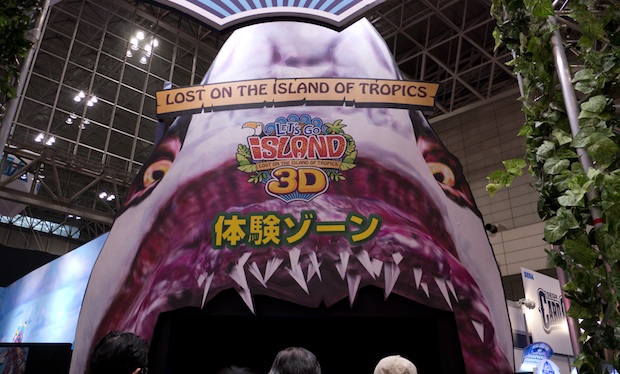 In Japan Sega has arcade date games. In these you’ll sit with your date in a two-seater, usually in some kind of closed off, private booth. In this booth you’ll both control a simple game, which is usually a light gun game. There’s key moments to scare the girl so she’ll jump into your lap. You get a few laughs, a bit of entertainment and maybe a bit of cuddling for your 500 yen. Not bad.

At AOU 2011 I tried out Sega’s latest in this arcade date game line, Let’s Go Island 3D. This one’s pretty crazy, and a bit more comedic than other’s I’ve tried, like their popular House of the Dead games. In this game you play as an American white couple on vacation on a lovely tropical island. After arriving things immediately go south and you end up going on an insane adventure on and under water, in an on-rails lightgun game. You control watercraft and are armed with guns (harpoons?) and you’ll use them to do right. You’ll also yell out things that only an American white couple would yell. “Oh no! Yikes!” Japanese players got a kick out of these voicings.

There’s a few things that make this one notable. First off, it features glasses-free 3D. It looks really great, but if you’re not feeling it, there’s a button outside the booth that lets you switch the game to flat 2D. There’s hidden air jets that shoot out bursts of air into your face to surprise you. In once scene, while underwater, I came across a dolphin caught in a net (oh no, Chad!). You have to button mash to release it before a giant octopus comes along to eat it. If you don’t make it in time, the octopus hits you with a giant tentacle. As it swings at you in awesome 3D, the jets blow air in your face to startle you.

The only other notable thing about Let’s Go Island 3D is how funny it is. That carries over even to the cabinet design, which you’ll see in our gallery below. I may have not been on a date, but this game was still a lot of fun.