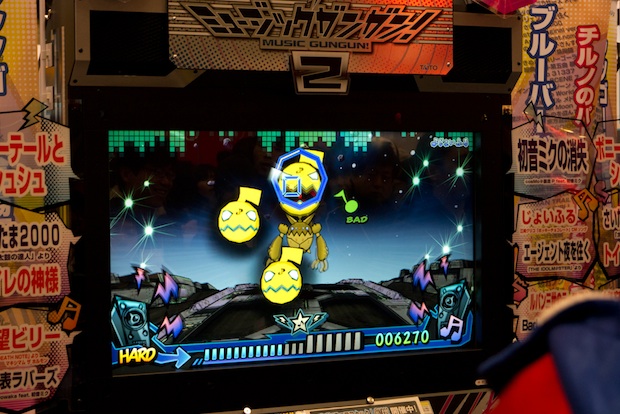 After waiting in an insanely long line at AOU 2011 yesterday, I got a chance to play. I was cocky and told the attendant that I would not be needed the tutorial mode. I picked a hard song on a hard level and got a “D” grade score. I heard those behind me in line snickering. I later came back and got a “B” on an easier song, but it was too late by then. None of those that saw my original failing were there to see this redemption.

As you can see in the video above, you’re in a boss battle of sorts, and you’ll work alone or with a partner (400 yen for 2P!) to shoot out bad music notes to the beat. A hoop around the notes lights up to give players a feeling for the beat. A full rotation indicates a full beat, and that’s when you should shoot. It you play two-player, both players will trade off rhythms. In the harder modes, you’ll have to shoot 16th notes and fire and drag notes in perfect time. It gets pretty insane, as you’ll see at the end of the above video.

There’s going to be about 100 songs total when GunGun 2 hits arcades. Within the offerings I saw, there’s game music (Super Mario Bros. Theme included), original songs, anime, J-pop, classical and “kids.” Of course, some of the most popular offerings were listed under the Hatsune Miku.