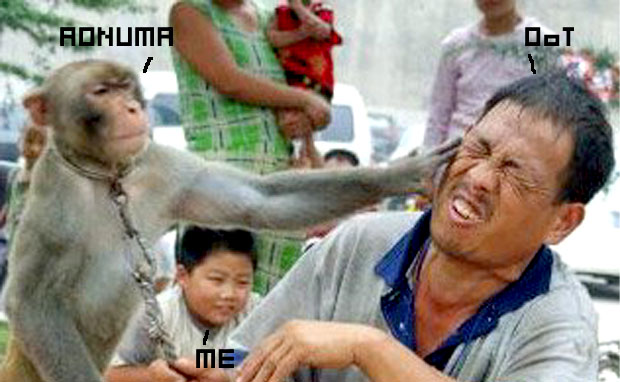 Here’s a pet peeve of mine; people with a rose-tinting deification of Ocarina of Time. For me, that game, along with Mario 64, will always symbolize a personal low-point for my feeling of connection to videogames as a whole. Of course, I understand why people love both of those games, and it’s totally understandable that they’d be a lot of people’s favorites, but to unequivocally say that either of those games are “the best” in their respective series is just poppycock.

It’s nice to hear that Eiji Aonuma, current overseer of the Legend of Zelda series, seems to agree with me. According to a recent interview (translated from Japanese to Spanish to English, so take it with a grain of salt), Aonuma feels that “If you play Ocarina of Time nowadays, you notice that it’s not that good. Sometimes it doesn’t move as fast as it should, graphics aren’t as beautiful as they should be; there are some confusing parts… Any present Zelda is technically superior.”

Hear hear, Aonumu-san. Personally, I feel that every 3D Zelda since OoT has been a big improvement over the series’ original outing into the third dimension. I still prefer Zelda in 2D, but if I have to play a “newer” one, I’d rather it be Majora’s Mask, Wind Waker, or Twilight Princess.

For more on Aonuma’s take on Zelda past and present, and the rumors of an OoT remake, hit the link below.

Filed under... #FAIL#Interview#The Legend of Zelda