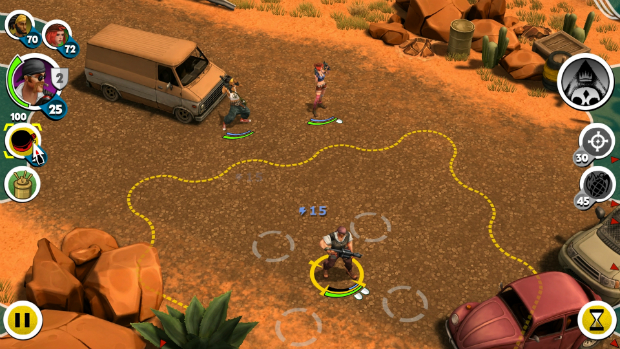 Set in a rocky desert environment and starring a cast of international mercenaries, it is reasonable to surmise that developer InsGames drew a bit of inspiration for AntiSquad from Valve’s iconic team-based shooter. Of course, there are some major differences that can set AntiSquad apart from Team Fortress 2. Chief among the differences is in the gameplay; turn-based strategy is about as far removed from first-person shooting as a game can get.

AntiSquad features five characters to play as, each having his or her own familiar strengths and weaknesses. Teddy, the Assaulter, leads the team and has a powerful melee attack. Backet, the Demolition Man, can place proximity mine traps. Rose, the Scout, uses speed and subterfuge to avoid damage. Cactus, the Sniper, is built for long range and piercing shots. Sunny, the Machine Gunner, is there to lay down as many bullets as possible.

It almost reminds me of Tom Clancy’s Ghost Recon: Shadow Wars, except with a brighter, less serious art direction. At only four dollars on Steam Early Access, it might just be worth investigating.