Can’t get Mass Effect 2 out of your head? I can’t either. I have questions, all of which tickle me, compel me to prod. But they aren’t about what happened in the game. Instead, I wonder about its characters, its genre and possible DLC.

With tons and tons of swirling thoughts, I approached EA about doing an interview. I didn’t ask many connected questions. That wasn’t the point — I wanted to learn more about what was in my head at that second, those hungry beasties filling my skull.

Wish granted, the game’s project director Casey Hudson unwittingly satisfied my desire to just know more in the moment — to know more about those curious flashes when Shepard talks to Thane, how BioWare defines Mass Effect 2, and the exclusion of a same sex relationship. Spoilers abound. 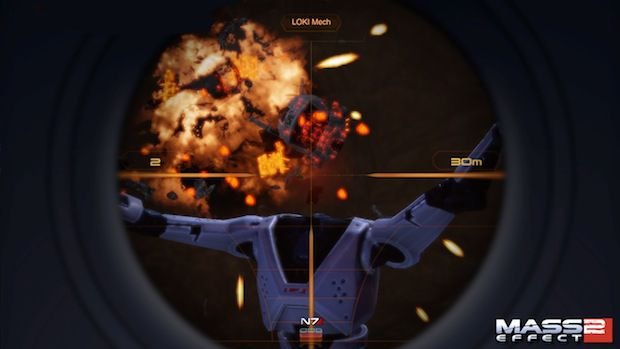 In brief: Mass Effect 2 is an excellent, brutal game. The cinematics, oh-so-sweet, draw you in to an unmistakably fantastic sci-fi universe where all, oddly, doesn’t seem possible. Threat of invasion, a galactic collapse, hangs thick in the air. But here you are, as Commander Shepard, fighting against what seems to be inevitable defeat.

You will create meaningful relationships. You may then watch that person die. You will make decisions that don’t straddle strict moral lines. You will decide how Mass Effect 3 plays out.

A departure, Mass Effect 2 features stop-and-pop above all else. You’ll slide from cement column to bullet-chewed barrier, ducking laser fire, escaping death by, of all things, placing your back away from its red hot menace. The mechanics are tighter, much more focused on what the great third-person shooters like Gears of War have been refining, tuning, and evolving. You have less biotic attacks, less need to order squad mates, and a unique-feeling weapon you’ve become comfortable with.

It’s an action game. Or is it still an RPG? You’ll still be traveling the galaxy at will, collecting EXP, interacting with others, molding an experience for your own Shepard.

“There’s been a lot of discussion about what genre of game Mass Effect 2 is, what it was meant to be, and whether it satisfies expectations of different genres,” Hudson told me via e-mail. “To be honest, we don’t really design our games from the standpoint of what’s expected of a given genre.

“Our only goal is to create the very best games we can make, by learning from what we’ve done and evolving our approach. At BioWare we think of a great RPG (or in fact any game) not as a list of traditional features, but as design pillars that allow us to redefine our concept of an ideal game.

“These pillars are things like intense combat, the freedom of exploration, rich non-linear storytelling, and compelling character development and customization. Our most recent games, Dragon Age: Origins and Mass Effect 2, show how this flexible approach can capture very different experiences that each work on their own merits.” 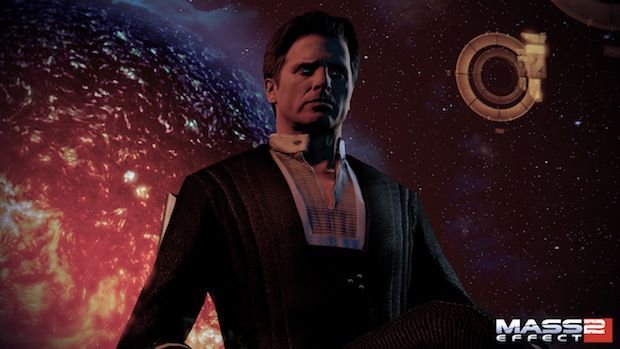 Mass Effect 2 an RPG — but it doesn’t matter so much how it is defined, according to Hudson. Its building blocks are what really matter.

One of those blocks, a pillar, is the combat, which has seen a massive streamlining since the original. I think of Mass Effect 2‘s combat as a rebuilding effort because of all the various tweaks, fixes, and stripped mechanics. Hudson disagrees.

“The 3rd person shooter style of combat in the original Mass Effect was quite well received,” he said, “so the combat wasn’t rebuilt so much as it was tuned and polished. For Mass Effect 2 we improved everything about how combat works, with an improved cover system, more precise aiming and weapons, smoother movement, and more active use of powers. “

But there’s no denying that Mass Effect 2 is a snappier affair. It’s easier to find missions now, and they’re quicker to end. The UI begs you to move in the right direction. The game now forces confrontation after key scenes.

“This was another area where we looked at places where people encountered roadblocks in the original game, and made sure there were features that made those things feel more natural.

“An example is the general flow of information about what missions or activities are available for you to do next. By adding Yeoman Chambers and an email system, we had a few more ways to fluidly communicate things about where you can go and what you can do. This kind of small improvement was made in countless aspects of the game, making each detail feel like more smoothly integrated into the whole.” 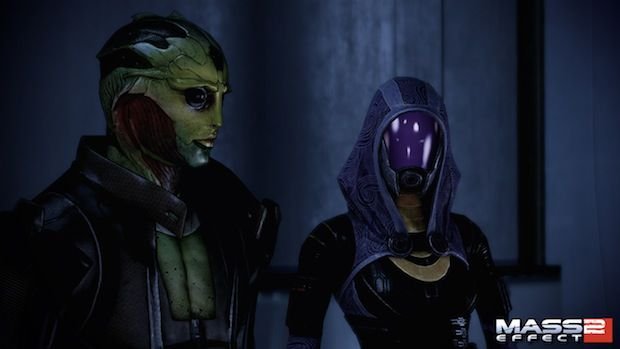 Part of that whole are the characters. You’re on a suicide mission that requires the most talented people to see it to completion. One of those is Thane, a space frog with a mean history who offers some of the most spectacular dialogue.

When you start delving into the frog, the screen flashes. He moves his eyes rapidly, blinks with two sets of lenses with matching speed, recalling events, dredging up memories from a past he doesn’t seem comfortable with. Miranda doesn’t do this, nor does Jack or Grunt or anyone else.

Hudson disagreed that Thane does things differently because the goal was to make each character’s story and interaction unique.

“I’m not sure it’s that Thane in particular was different, but rather that each character offers something quite different from the others.

“For example, Samara has a unique point in her story arc that can offer new powers and a wild little story twist.  Subject Zero has an interesting hook in her romantic relationship that many people may not know about, and once you learn her backstory you’ll likely warm to her quite a bit versus your initial impression of her. We try to make each character offer very different aspects in both gameplay and story.” 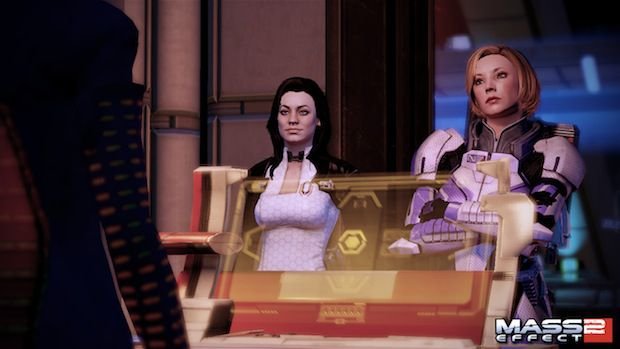 One story that I didn’t see in the game was Legion’s, a Geth that can apparently do more than his brethren and operate outside of their typical parameters.

Because I missed him I assumed that he was something of a hidden character, a minor piece of the Mass Effect puzzle that wouldn’t do much for Mass Effect 3. He will, though, according to Hudson. But there’s a small catch embedded in his message about Legion’s importance — the team will keep tabs on which characters people are using the most in their playthroughs.

“We’re deep in spoiler territory, but yes, he’s a significant character even though he’s totally optional.  As with all characters, your decisions regarding Legion will carry forward into the next game. One thing we’re going to keep an eye on is how people make use of each of the characters in Mass Effect 2. That will influence our decisions on the importance of those characters in the ongoing story into Mass Effect 3.”

I’m pretty sure you can’t romance Legion, despite how terrible your face looks, and I’m certain you can’t romance a character of the same sex, unlike in the previous Mass Effect or even other BioWare RPGs of late. 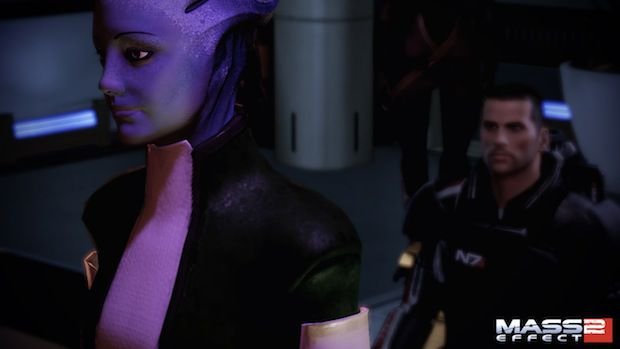 Hudson didn’t tell me why the team opted to not include this option in Mass Effect 2, but he did say that the option will come back in Mass Effect 3 — if you laid the groundwork for it in the original game.

“In Mass Effect, as a female Commander Shepard you could have a romance with the female-looking yet asexual asari, Liara. That love story will continue into Mass Effect 2 (and Mass Effect 3) if you had started it in the first game, though things will be a bit rocky between you this time around because you’ve been away for two years.  You’ll be able to conclude that story with Liara in Mass Effect 3, though keep in mind that your romances in Mass Effect 3 will have an impact on how that plays out.”

“We actually have a pretty long campaign of various types of DLC currently being developed. It will cover the whole spectrum, from free items and content all the way up to several-hour adventures. We’ll be announcing some of the first bits soon, and one of the places you can find news about upcoming DLC is in the Cerberus Network panel on the start menu of the game.”