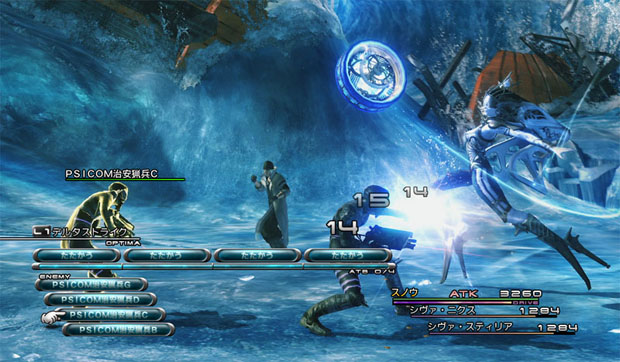 As requested and promised, here’s our additional Ten Minute Taste of the Japanese version of Final Fantasy XIII. Our first one didn’t do much for those that played the Japanese demo, as it covered much of the same ground.

This new one comes from about 3 hours into the game. We did our best to pick a part that showed something new, working hard to avoid anything that would spoil the story. That said, if you’re trying to save yourself for the US release, keep in mind that this is well past the first ten minutes. If you don’t understand Japanese, you won’t have to worry about that, though.

Here you’ll see a new stage (shiny!) and some more involved battle tactics. It’s definitely more involved than the mindless attacking from the beginning, but it gets even better. It takes a few more hours before the game really opens up, in both the battle system and the world.

I’ve been asked a few times for an early verdict. This won’t do much for you, but it should be fairly obvious:

If you love Final Fantasy, you’ll likely love this. If you hate it and other JRPGs, don’t bother. Just as you expected. Big crazy story, shiny graphics, lovely music, just like always. A non-branching storyline in the beginning, though. That’s also the case in other series games. Final Fantasy was never an exploration game, so why expect that now? I love this fast-paced battle system when it finally opens up. No healing after battles, no walking through towns to advance storylines. Good changes. Fun game.