Will feature characters from the new ‘Soul of Gold’ series

Bandai Namco Entertainment has announced that another Saint Seiya game is happening, this time for the PS3, PS4, and PC platforms with the subtitle Soldier’s Soul. It follows the same formula as the last game in the series as a one-on-one 3D fighter, and Dimps will once again handle development.

I had a chance to sit down with the game’s producer Ryo Mito, and learn a bit about the new iteration, his experience with PC porting, and their ever-growing fanbase in Latin America.

To kick things off I asked Mito about the sales of Saint Seiya: Brave Soldiers, which was released in 2013. He noted that Namco was pretty happy with its numbers, reaching a sales mark of 250K, which was, in his mind, a positive. Mito went on to say that “there were a lot of voices from fans for a new game, and we wanted to deliver. With the Soul of Gold anime literally debuting a few hours ago (on April 10), this is the perfect time for that.”

The PS4 and PC versions will boast 1080p/60fps visuals, and although the PS3 iteration won’t emulate that performance, it has the same amount of content as the other platforms. Online and local play are in, as well as the entire roster from Brave Soldiers with some additions. The biggest improvement Mito is excited about is the “better battle system, which allows for more choices at different ranges of combat” — it has “drastically changed” since the last game.

Speaking of the visuals they look absolutely amazing on the PS4, and basically mirror the anime even with the really early build they have now (which was playable, but only by the presenters). One character donned in golden armor had a beautiful sheen to him, as did all of the particle effects from the blast attacks. Mito states that they are aiming to please the core fanbase of Saint Seiya with the new combat, but they also hope to make it more accessible for newer fans. 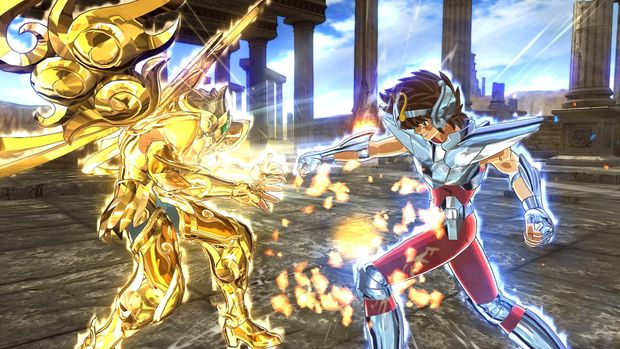 I thought it was particularly interesting that a number of Bandai Namco games have been getting PC ports recently, so I pressed him regarding his experience with Steam and the platform in general. He said that although some eastern developers haven’t come around to it yet, “there have been no problems [for us] with developing for Steam. The fact is games are developed on a PC already, so it’s not a big deal. We really wanted to get the game into the hands of more players so we’re excited to work more on the platform in the future, and will be supporting it more as time goes on.”

There is a neat bit of news for a certain area of the world that Bandai Namco has been going out of its way for. As a result of the company’s increasing presence in Latin America, the game will ship with a localized version for that region, complete with the original cast of the anime.

It’s important to note that it will not have an English dub, so this is a huge win for Latin fans. Additionally, when asked about why the game is being released on the PS3, Mito said that “we still have a very strong playerbase in Latin America who haven’t upgraded to the PS3. Specifically for them, we wanted to have our game available.”