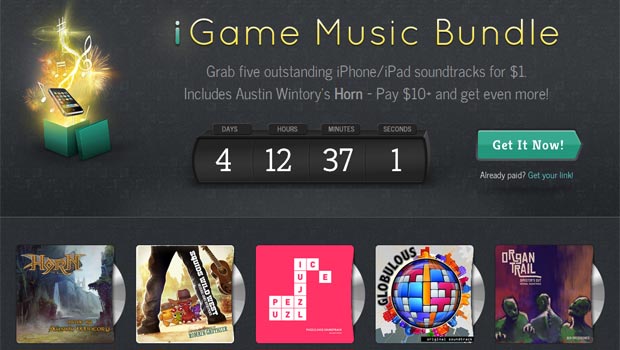 The folks at gamemusicbundle.com are back, but this time with a twist. The iGame Music Bundle features an assortment of iOS title soundtracks from names both familiar and new. The usual format is in place, with five soundtracks available for the low price of just $1 and seven more for those who contribute at least $10. Additional albums are added to the bundle as certain sales thresholds are exceeded, and the top contributors will be rewarded with special prizes.

So, what’s included? You may remember the name Austin Wintory from his work on Journey. He’s here with his fantasy-infused Horn soundtrack. There’s also Puzzlejuice by Jimmy “Big Giant Circles” Hinson, two albums from the talented Romain Gauthier (with Squids Wild West being exclusive to this bundle), and several other opportunities to get turned on to titles and composers that you may not have heard before.

There’s a little more than four days remaining at this point, so I highly recommend checking it out even if you’re going to join in at the $1 level. Let us know what you think of this round of offerings!