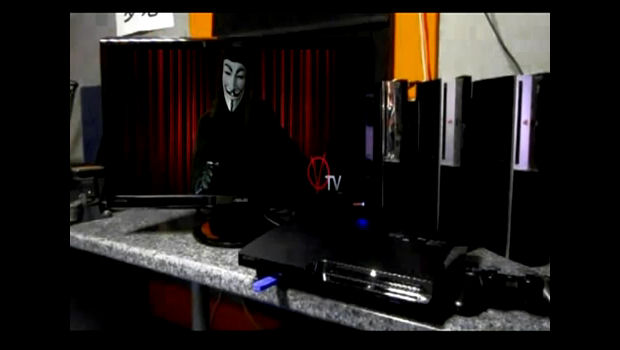 Despite Sony settling out of court with George “GeoHot” Hotz, Internet activist group Anonymous is not ceasing its retaliatory attacks. Still maintaining that the company is corrupt for its war on PS3 hackers, the group is planning a Sony store boycott and the “biggest attack” Sony’s ever faced.

“GeoHot has taken a settlement with sony,” announced the group. “The case has been dropped. In the eyes of the law, the case is closed, for Anonymous it is just beginning … The attacks on the websites of Sony have been ceased, Sony’s poor attemps to explain the system outages through maintenance amuse us. Therefore we are finding other ways to get sony’s attention.

“This April 16th, grab your mask, a few friends, and get to a local sony store by you. Use the IRC and the official Facebook page to organize a protest in your area. Make sure the people know the injustices performed by this corrupt company.Boycott all sony products and if you have recently purchased any, return them … Sony, prepare for the biggest attack you have ever witnessed, Anonymous style.”

Having not had its pound of flesh from Sony before the GeoHot case was resolved, it’s hardly surprising that Anonymous remains unsatisfied. Does it have a serious point to make about consumer rights, however, or is it just spoiling for a fight over a non-issue? Who knows? Does it matter, so long as we get to see a guy in a Pedobear costume parading around outside a Sony store?