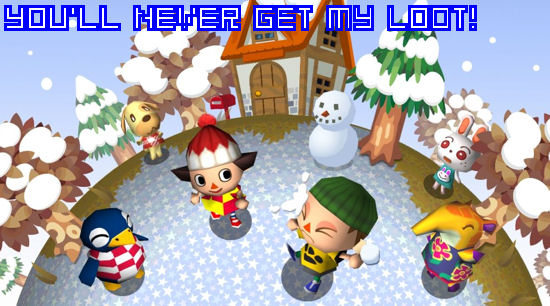 I’m actually one of the few people who, despite wanting to, really didn’t like Animal Crossing very much. Having played the DS version for weeks, I suddenly came to the realization that I was playing what amounted to little more than a boredom sim. Today, however, it seems that Nintendo is flooring me with the perfect rebuttal — Animal Crossing: The MMO.

All we know so far is that Edge magazine has the news confirmed from a Japanese source and that this will affect the Wii version of the game. For a system not known for its online exploits, the merger of a beloved IP with a perfect MMO platform is something that could propel the Wii into the Internet gaming market almost instantly.

Nintendo itself won’t confirm a thing, but I propose we board Tom Nook up in his shop and set fire to it until someone talks. Even if someone doesn’t, the image of an anthropomorphic raccoon screaming in a boarded up shop as he burns to death is absolutely hilarious.

You may not think so, but after the first time, you’ll find it bloody addictive.

[TheGoldenDonut is a tipster who tips]